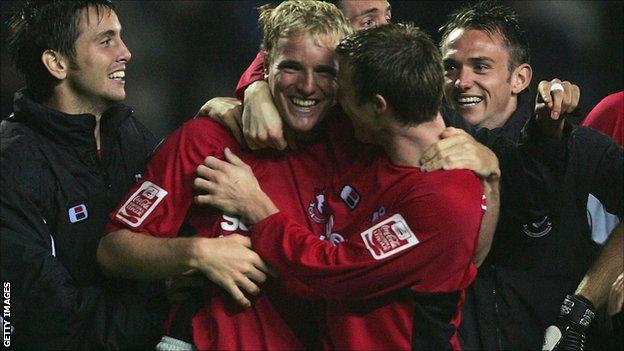 Bournemouth boss Eddie Howe says he is relishing the visit of Blackburn in the Championship on Saturday - the first time the two sides have met since his winning penalty against them in 2004.

The Cherries beat then-Premier League Rovers on penalties in the League Cup nine years ago this week.

"When you play well, you tend to remember it and forget the bad games," he told BBC Radio Solent.

"I have good memories, let's hope we have some more on Saturday."

The game finished 3-3 after extra-time at Ewood Park before Howe stepped up to seal victory 7-6 on penalties, and he added: "I always regard that as one of my best games in a Bournemouth shirt.

These are great games, you have to pinch yourselves sometimes

"I didn't want to take a penalty, it was not one of my strengths, thankfully Tugay missed and that took the pressure off and I didn't have anything to lose."

Howe says he can see similarities between that team of 2004 and the current crop and hopes they can repeat the performance of that night.

"It had everything that game," he said. "It was a fantastic advert, we showed great character which was a hallmark of that 2004 team and is also a hallmark of this team.

"We showed that last week [at Middlesbrough]to show great desire to get a point and hopefully we can do the same on Saturday."

The visit of Blackburn, as well as FA Cup winners Wigan last month and the trip to Middlesbrough - all former Premier League clubs - shows how far the Cherries have come in such a short space of time.

And Howe admits he has to sometimes remind himself of that fact.

"They [Blackburn] were an established Premier League team recently and they are looking to get back there. We are so few games into the season it is difficult to say who is going to be competing at the top.

"All I do know is that they are a good side with a very good goalscorer in Jordan Rhodes and are going to be a real threat.

"These are great games, you have to pinch yourselves sometimes."