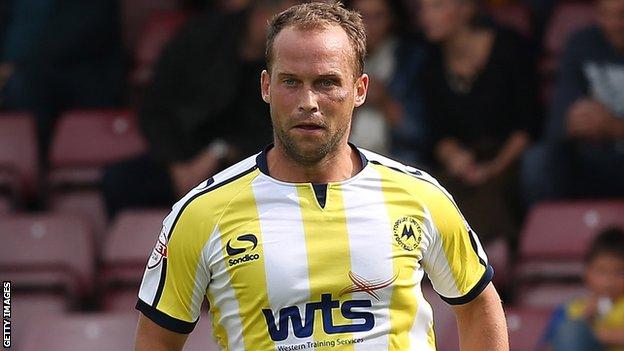 The 32-year-old has made eight appearances for the Gulls this season, but Tom Cruise started the 4-2 win over Cheltenham on Saturday.

Kevin Nicholson is very much a fans favourite at Plainmoor, and was selected in the PFA's League Two Team of the Year in 2012.

But it now appears as though Nicholson's 301-game Gulls career may be drawing to a close with the emergence of Tom Cruise.

The former England youngster has caught the eye of manager Alan Knill since he took over at Plainmoor, making all but one of his eight League Two starts under the former Scunthorpe boss.

"It was a surprise for me but I totally understood it because at his age Nico wants to play," Gulls manager Alan Knill told the club website.

"He said to me he wants to go on loan, so we wait and see what happens."

Torquay also have Niall Thompson, Ashley Yeoman, Nathan Craig and Jake Hutchings available for loan, but Knill stated that no moves were imminent.

"'We've not had any movement as yet but they are all available for loan and it's all about getting games," he continued. "The majority of them came to me asking for the chance to play first-team football elsewhere.

"'If it comes around, that frees up some money for us to go and get someone else."

The Gulls are currently 16th in League Two having won just one of their opening eight games.