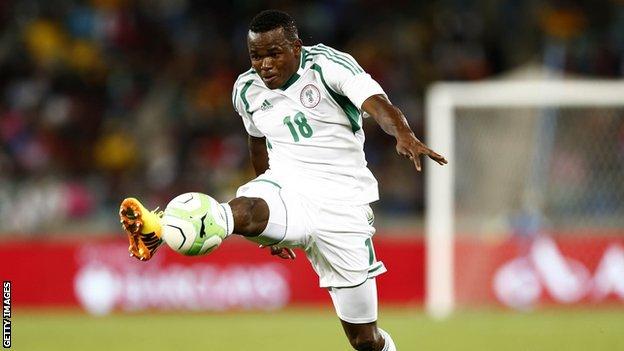 Nigeria striker Victor Obinna Nsofor is keen on a English Premier League return - but will respect his contract with Russian club Lokomotiv Moscow.

The former West Ham United forward joined Lokomotiv in the summer of 2011 after a season on loan at Upton Park.

Interestingly, the club have made two futile attempts to take him back and he has not ruled out a possible return.

"It's true, several times and on two occasions they [West Ham] came for me," Obinna told BBC Sport.

"They were close to take me back to West Ham, but from day one Lokomotiv took me to Russia for a project and they are happy with me and they want me to stay.

"I am happy as well so I needed to do my job and respect my contract. Once they are not satisfied or say I can leave, that's when I can start thinking of leaving."

The 26-year-old scored eight goals in 23 appearances for the Hammers, including an FA Cup hat-trick against Nottingham Forest.

Obinna started his European career in Italy playing for Chievo Verona and giants Inter Milan before spells in Spain and England prompted a move to Russia.

But the Super Eagle would love to have another chance in English football.

"I enjoyed my time at West Ham, left with great memories and the fans and league has a special place in my heart.

"Some of the fans are still my friends on facebook and sometimes they say 'please, come back we need you here', but all I can say is that - maybe in the future.

"For now, I'm happy with Lokomotiv."

Obinna has already been capped 44 times by Nigeria, scoring 11 goals, and he appeared twice for his country at the 2010 World Cup.