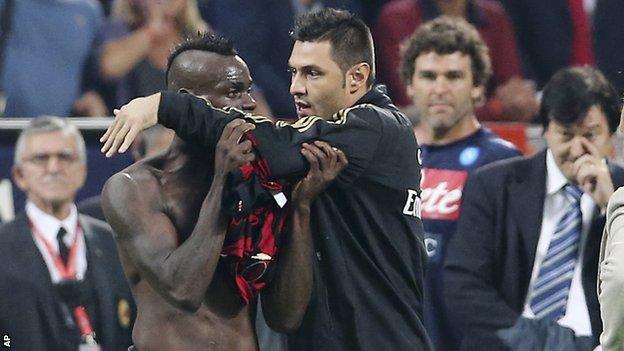 AC Milan striker Mario Balotelli has apologised to his team-mates and the club's fans for his red card after Saturday's 2-1 defeat by Napoli.

"I am sorry for my team-mates," the 23-year-old told Gazzetta dello Sport. "They train and work hard with me. What I did hasn't helped our cause.

"I also feel guilty for the fans, who care so much for the team."

However the former Manchester City striker added: "I made a mistake when I was provoked... but I'm not going to apologise to everyone. It's not as if I killed someone."

Balotelli was shown a second yellow card at the final whistle after remonstrating with Napoli midfielder Valon Behrami and the referee at the San Siro.

The Italy striker had earlier missed a penalty for the first time in his career before scoring an injury-time consolation.

After the club decided not to appeal against the ban, coach Massimiliano Allegri said: "Mario is 23 years old, he is no longer a child.

"Mario has made a mistake, penalising the team, the club and the supporters, and he must change this behaviour."