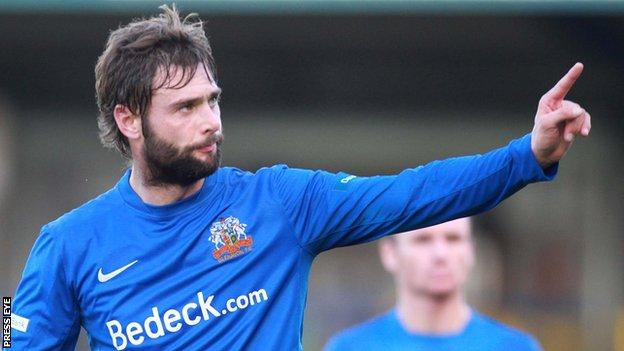 Player-manager Gary Hamilton has left himself out of the Glenavon squad for Saturday's league trip to Crusaders.

The former Glentoran striker dislikes artificial playing surfaces like the one at Seaview and feels they put players at greater risk of injury.

However, Hamilton believes now having former Crusaders men David Rainey and Gareth McKeown on board is a big plus.

Glenavon are the early leaders in the Irish Premiership and Hamilton has been rewarded with a contract extension.

Hamilton's men were beaten 4-1 and 5-1 in their games at Seaview last season but the player-boss is confident of a better result this time.

Mid-Ulster pair Glenavon and Portadown are the top two in the table and we're featuring them in Saturday's Sportsound programme.

Joel Taggart is the commentator at Shamrock Park where second-placed Portadown face Glentoran.

Grant Cameron will keep us up to date from Seaview as leaders Glenavon hope to keep their good run going against Crusaders.

Last weekend's 1-0 home win over Cliftonville has raised hopes at Mourneview that the Lurgan club could be heading for their best campaign for many years.

Striker Guy Bates is unlikely to face the Crues after limping out of the Cliftonville game with an ankle injury but former Derry City front man Mark Farren is reported to be ready for a return to action.

"We just hope we can keep our good run going. There is a good feeling around the club at the minute," said Hamilton.

"Losing Guy would be a setback for us but the bonus is having Mark Farren coming back. It shows how important it is to have a strong squad."

After facing the Crues, Glenavon have a home clash with Linfield and then the Mid-Ulster derby showdown against Portadown who are currently second.

Elsewhere on Saturday, Portadown are at home to Glentoran who have plummeted to eighth, having briefly led the table earlier in the season.

Champions Cliftonville will aim to maintain their impressive record against Dungannon Swifts at Stangmore Park.

Tommy Breslin's men have uncharacteristically lost three out of their last five league fixtures but did look good in beating Glentoran 3-0 in a midweek County Antrim Shield game.

Linfield, up to fourth in the table after four consecutive victories, are at home to Coleraine.

"I watched Coleraine when they won at Solitude recently and they were mightily impressive," said Linfield boss David Jeffrey.

"They have some quality players - Stephen Lowry is one, and Gary Browne is having an injury-free run and showing the benefit of getting a few games.

"Stephen Douglas has added to the team, Howard Beverland and David Ogilby are strong defenders. I could go on."

The other two Premiership games on Saturday feature the bottom four with Ballymena United at home Warrenpoint Town and Ards facing Ballinamallard United at Dixon Park.