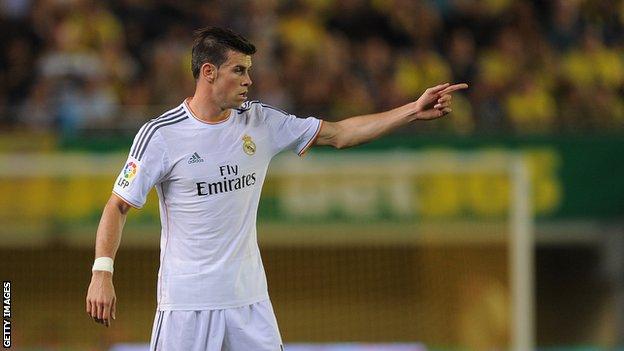 The world-record £85.3m summer signing from Tottenham has missed the last two games with a thigh muscle injury as Real extended their unbeaten start.

Bale 24, made a goalscoring debut in the 2-2 draw at Villarreal and then featured as a substitute in the 6-1 Champions League win over Galatasaray.

"I think he will be ready for Saturday, no problem," said boss Carlo Ancelotti.

Atletico have won all their six games so far this season, as have leaders Barcelona.

Under new manager Gerardo Martino, Barcelona have yet to drop points and can make it their best ever start to a season if they beat Almeria.

The other unbeaten side in La Liga, promoted Villarreal, visit Real Betis on Sunday night.

Roma, who are top of Serie A after winning their first five games, host Bologna on Sunday.

There are three other unbeaten teams in the league, all level on 13 points. Rafael Benitez's Napoli go first, on Saturday away to Genoa, with Juventus at neighbours Torino and Inter Milan visiting Cagliari on Sunday.

"I have faith in the team, if we want to get better in a consistent way and get the maximum number of points, we have to use as many players as possible so we get to the end of the season in good form," Benitez said.

The Bundesliga's top two are in action on Saturday afternoon - Bayern Munich host Wolfsburg and Borussia Dortmund are at home to Freiburg.

"I think we can be very pleased with our recent performances. We're definitely heading in the right direction," Bayern captain Philipp Lahm said,

Ligue 1's two unbeaten teams, Paris St-Germain and Monaco, will both hope to keep their unbeaten runs going this weekend.

Galatasaray, who sacked legendary manager Fatih Terim in midweek, host Caykur Rizespor on Saturday. There are reports that striker Didier Drogba could take caretaker charge of the Turkish champions.

Their last game, against rivals Besiktas, was abandoned when supporters invaded the pitch at the Olympic Stadium. Besiktas, who are away to Antalyaspor on Monday,