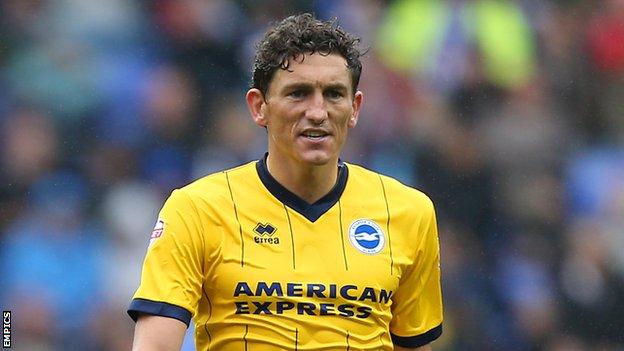 Brighton midfielder Keith Andrews says he has been impressed by the team spirit since his move to the club.

The 33-year-old joined on a season-long loan from Bolton last month.

"For me it has been a breath of fresh air coming in here. The bunch of lads here want to do well and want to progress," he told BBC Sussex.

"There are no egos here, which is unfortunately what you get at a lot of clubs in this day and age. We are very much in this together."

Republic of Ireland international Andrews has made five appearances for the Seagulls following his move south.

The former MK Dons and Ipswich man initially expressed his surprise at the switch but says he is determined to make a success of his time in Sussex.

"If I can bring things to the table on and off the pitch, it is just who I am," he said.

"I come in and try and do the best I can. The reason I am here is because I want to achieve things in my career.

"I could quite easily have sat at Bolton and played bits and bobs but I want to come and be a main part of a team and try and achieve something. I am not ebbing out the last years of my career.

"Hopefully we can do that this year."

After losing their first two games in the Championship, Brighton have gone six games unbeaten and are 10th in the table.

From the opposition we have come up against so far, I don't think we have got anything to fear in this league

Andrews believes the Amex Stadium outfit are capable of making the play-offs for a second consecutive season.

"The are probably 10 or 12 teams who have aspirations of getting into the top six," Andrews added.

"From the opposition we have come up against so far, I don't think we have got anything to fear in this league.

"The main thing you have got to do is be is consistent and certainly in the last six games we have proved hard to beat.

"When we have the squad fully fit, or as near to full fitness as possible, I think we can be a real force."

With a trip to Ipswich on Saturday and home matches against Sheffield Wednesday and Nottingham Forest before the international break, Andrews says Albion are in store for "a big week" in their campaign

"We have got three good games and the manager [Oscar Garcia] has spoken in training that we must not rest on our laurels," he said.

"I totally agree on that. We need to push on and we cannot sit still. If we want to achieve anything this year we need to make sure we have a good points tally next week."