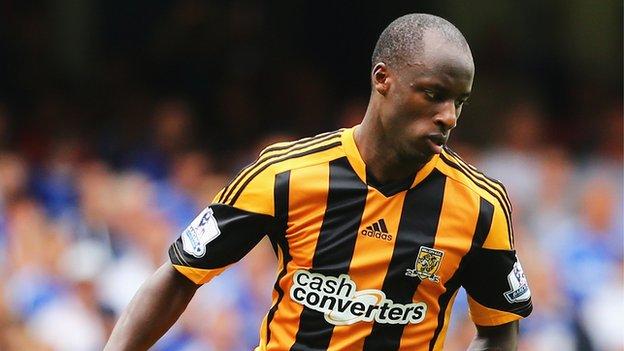 Hull City's Sone Aluko is aiming to establish himself in the Premier League and earn a Nigeria recall.

The former England youth international switched allegiances four years ago and made his Super Eagles debut in 2009.

His last game under coach Stephen Keshi was in June 2012 as a substitute in a 2-0 over Rwanda in a 2013 Africa Cup of Nations qualifier.

"If things go my way this season I can still break into the team for Brazil definitely," he told BBC Sport.

"If I maintain my form then I will have a good case for selection."

Sone Aluko like many others is still in my plans

Nigeria face Ethiopia over two legs in October and November in a play-off for a place at the 2014 World Cup in Brazil.

Injuries have prevented Aluko from being a regular for the Super Eagles and he has not featured in Nigeria's 2014 qualifiers so far.

"Disappointed would be a strong word to use maybe but I've never hidden the fact that I want to play for Super Eagles," he said.

"That remains the aim so missing out again is frustrating but makes me hungrier too.

"Earning a recall does cross my mind but it is not an everyday thought.

"During international breaks and other random times when team-mates and coaches ask me how come I've not been selected, then I think about it."

While Aluko believes a place in the Nigeria squad is achievable he does concedes that others are ahead of him in Keshi's thinking.

"To keep working hard and hope is all I can do, we are fortunate as Nigerians that we are blessed with top players especially in attacking positions so competition is high," he said.

"I'm now in arguably the best league in the world and in the Premier League good form for my club playing regularly so I can't do too much more than I am.

"Hopefully I can maintain this and focus on helping Hull City."

Aluko scored his first goal of the season last weekend as his spectacular volley helped Hull to a 3-2 victory over Newcastle United at St James' Park.

Coach Keshi has said Aluko could still play for Nigeria again, despite being overlooked for over two years.

"Sone Aluko, like many others, is still in my plans. I've seen him before, but we can't invite all the players to camp," Keshi explained.

Aluko, who has also represented Nigeria at the Under-20 World Cup and played for their Olympic team, says he is under no illusions about the task facing him in his quest for a recall.

"Being in his plans but not in the squad doesn't really help me," he said.

"We all want to go to Brazil and I haven't played in a single qualifier leading up to it so I think actions speak louder than words and right now it's clear I'm not in his plans so I wont sugar-coat it.

"But playing well in the Premier League and in God keeping me healthy is where my hope is."