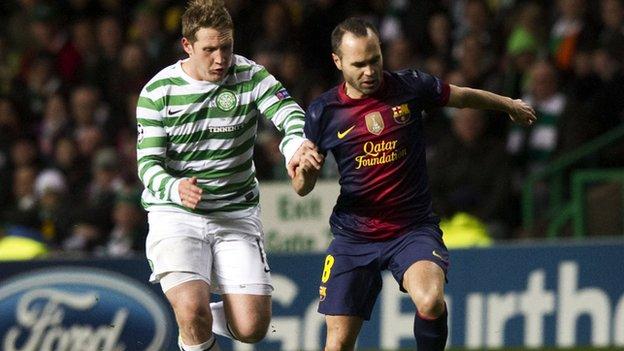 Kris Commons is sure Barcelona will not underestimate Celtic's chances of repeating last season's historic win.

Last November, Celtic beat the Catalans in Glasgow and the teams meet again in the Champions League on Tuesday.

"It is going to be difficult but I think it will be very unprofessional of them if they didn't think that we were a threat," said midfielder Commons.

"For us, it is about staying focused and trying to repeat what we did last year."

Celtic played well only to lose 2-0 to AC Milan in the San Siro on match day one of this season's Group H campaign which encouraged Commons, who shrugged off the shock 1-0 defeat by Morton in the Scottish League Cup third-round on Tuesday.

Looking ahead to another visit from Barcelona, the 30-year-old said: "I know we got beat by Morton the other night but they will be looking at footage of us playing against AC Milan and how well we did there and probably showing our own strengths and weaknesses.

"(Barcelona) obviously now have Neymar who is one of the best players in the world, so attacking-wise, they will be a bigger threat.

"We certainly got some lady luck last year so we will be looking for a bit more of that."

Barcelona had 66% of possession in their 2-1 defeat at Celtic Park and Commons anticipates another hard, defensive shift from the home side.

"You have to give Barcelona respect," he said. "Even against the best teams in the world they probably have 65 to 70% of possession so you have to accept that they have technical geniuses throughout the team.

"If you start being a little bit kamikaze and chasing the ball around you will end up getting picked off and the ball is in the back of the net before you know it."

He said: "We have lost three of our better players, without a doubt - Kelvin, Victor and Gary.

"It is a bit of a transition period for us at the minute because we have bought players in at the last minute like Teemu Pukki and players who came in and got injured (Steven Mouyokolo).

"So we are thin on the bones but if the new additions find their feet pretty sharpish I think we will have a better squad than last year.

"It just takes that little bit of time to bed in.

"When you bring in foreigners, there is always the language barrier and culture and getting used to playing in front of such passionate fans.

"So it is going to take a little bit of time but not as much as people might think."