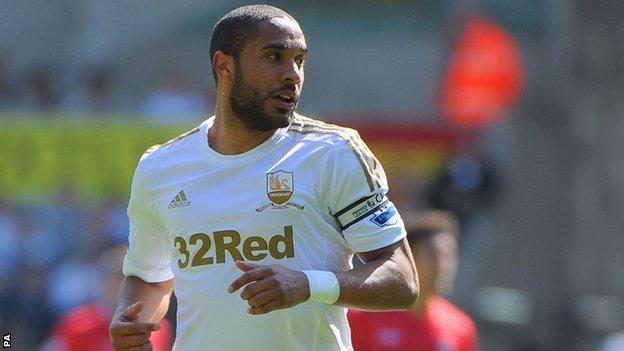 Swansea City boss Michael Laudrup has confirmed Ashley Williams is out of the Europa League clash against St Gallen.

The centre-back continues to struggle with an ankle ligament problem and could also miss the Premier League match against Southampton on Sunday.

Laudrup hopes Wales do not play him in their two World Cup games against Macedonia and Belgium.

"We should all do the best for one person and that's for Ashley not for Swansea or [Wales]," said Laudrup.

"If Ash is playing or not playing on Sunday I think he should still go with the national side so they can see him. The doctors and the physios can look at him.

"I've spoken to Chris Coleman a couple of times [in the past] and I think we agree the most important thing is the player."

Laudrup said in September that the club and Wales must cooperate more to safeguard the health of Williams, who missed the 2-1 Premier League defeat to Arsenal last Saturday.

"I'm a little worried, but the problem with Ashley is he's an international," Laudrup said.

"We have to be careful, but I mean the national team as well."

Williams should have played in both of Wales' World Cup qualifying defeats in early September, but a yellow card in the defeat in Macedonia five days later in Cardiff.

"They [Wales] have to go and play two games [in a short space of time]. If he doesn't get that recovery he could bring this injury for a month," Laudrup added.

"I would never ask a player to step down, not to play with his country but I think it's important in combination, club and national team, that we find a solution that can benefit all of us.

"There will be a moment I think where Ashley will need two weeks without a game."

Laudrup is also likely to be without Garry Monk and Pablo Hernandez against St Gallen, and the club will monitor Angel Rangel leading up to the game.