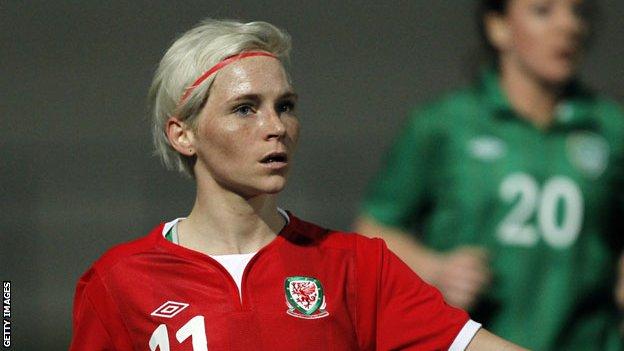 In her latest column for BBC Sport Wales, Wales Women's captain Jess Fishlock, who is on loan to Glasgow City from Seattle Reign, looks forward to the next World Cup qualifier against England and reflects on changing media attitudes to the sport.

It was great to get off to a winning start in our World Cup qualifying campaign against Belarus.

The most important thing for us was to get a result, the pressure was on us a little bit especially with England having had such a convincing win over them, so our 1-0 win was great.

We failed to win at the beginning of our Euro campaign and we were fighting a battle then for the remainder of the campaign.

We would have hoped to have scored more goals.

Belarus were always going to just park the bus and we were going to have to break them down and we don't tend to play a lot of teams where we have so much possession.

But we were in total control of the game for the whole 90 minutes, and now we're looking forward to playing England on 26 October.

They've started off their campaign really well which I think they were always going to do, coming back after the disappointment of the Euros.

England are going to feel that they have a point to prove so it's probably the toughest time to play them right now,

I've played against a lot of the girls over the last few years and a lot of the other Welsh girls have too in the Women's Super League. That probably gives us a little bit of confidence because they're not unknown, we know they're good players.

The pressure will be on them. They're top seeds so if you look at it from that point of view they should probably win.

Women's football is getting quite a lot of media coverage now compared to what it used to get.

The Euros were on the BBC and England's games are all covered. The reason the sport is getting bigger is that when people watch it, they really like it.

Because at the end of the day this is elite sport and so if teams and players don't play well then it should be normal for the media to say so.

You don't see the media tip-toeing around the men's national sides.

And that was kind of good to see at the Euros. England didn't do very well and there was true reporting.

Because even though England didn't do as well as they would have liked, it doesn't mean that things are going away because actually more people want to watch them because they know they can do a lot better.

It's something I've seen in America. The way they report is straight to the point, and very honest whether it was a good thing or a bad thing.

We (Seattle Reign) went through a nine-game losing streak and quite frankly sometimes you didn't want to look at the media side of it because it was quite hard to read.

But it was the truth and that's the elite level. You get the coverage you deserve and you get people's opinions and then you have to learn to deal with them and that then takes the sport to another level again.

People are not used to watching women's football live on TV, that was why it was such a success at the Olympics.

People watched it and it realised it was something they could support. They get familiar with the team and the players become role models. That's when fans go and watch it live - they want to see their role models.

We want the broader fans, the teenagers, the 20-to-30 year-olds because they are the ones that will always be there and provide the income and then that's where you grow.

People still compare women's football with men's football and you just can't, because it's just a completely different game. You almost have to view it as a different sport, really, which I know to people sounds a little bit weird, but that's what you have to do.

But if you look at women's sports where it is successful, and has a lot of backing and a lot of media coverage, whether it's in Europe or in America, it's because they view it differently and separately entirely to the men's game.

They accept it for what it is, and then people realise that it's actually really good and that's how they build on it.