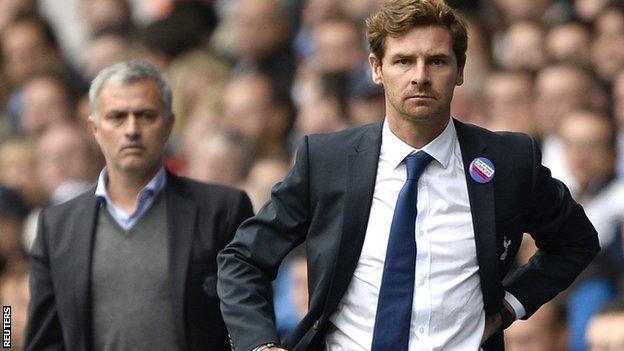 The debate and sub-plots surrounding the failed friendship of Andre Villas-Boas and Jose Mourinho, the man who shaped the Tottenham manager's early coaching career at Porto, Chelsea and Inter Milan, dominated the background to their first meeting in direct opposition.

It ended with an embrace at White Hart Lane, not exactly an end to hostilities but civilised at least, and the growing sense that Villas-Boas and his one-time mentor are currently in charge of two teams still in search of their true identity.

Searching for identity is always easier when it is carried out near the top of the Premier League, and there is little doubt that is where it will be conducted by Villas-Boas and Chelsea boss Mourinho on this season's early evidence.

Spurs boss Andre Villas-Boas worked as Jose Mourinho's chief opposition scout for seven years at Porto, Chelsea and Inter before leaving in 2009 to start in management himself.

Villas-Boas made the move because, he claims, Mourinho denied him a role with more responsibility at Inter. Since then, things have been frosty between the two former friends.

The frost could be felt in the air and seen in the lukewarm handshake between the pair as the Spurs manager made a sharp right out of the tunnel to greet the manager with whom he had shared past success before both men went their separate ways - Villas-Boas claiming Mourinho denied him a role with more responsibility at Inter.

There was more warmth at the conclusion of a frantic 1-1 draw - and the reality is that both have more important matters to focus their minds than a fractured personal relationship as this season takes shape.

Villas-Boas and Mourinho, for differing reasons, preside over sides in transition and this 90 minutes will have crystallised those thoughts in their minds.

Spurs, driven by the invention of Christian Eriksen, dominated the first half and it was the Dane's pace and subtlety that helped set up the early goal for Gylfi Sigurdsson.

Chelsea, invigorated by the introduction of substitute Juan Mata at the start of the second half, restored balance after that and deserved the point John Terry's header - from the Spaniard's free-kick - gave them.

Villas-Boas and Mourinho declared themselves happy with the point, although referee Mike Dean's decision to send off Fernando Torres late on contained an element of farce.

Torres and Spurs defender Jan Vertonghen appeared to be conducting a relationship based on that between Villas-Boas and Mourinho during a spiteful second half.

Chelsea's striker was fortunate not to be sent off after being booked for tripping the Belgian before clawing at his face.

When he did go, with nine minutes left, it was after a routine aerial challenge in which nothing happened. Torres' subsequent mystified expression was justified, although sympathy was tempered by his earlier reprieve.

Mourinho says "the project is beautiful" at Chelsea but some results may be ugly. This scoreline was a lot prettier for the Portuguese than it threatened to be at half-time.

"Jose was influential in my upbringing as a coach. He gave me the opportunity to go into professional football and I was able to enjoy great success working for him.

"He has made Chelsea what they are. His influence on them has been tremendous and his legacy speaks for itself."

He delivered a swift "not interested" retort when the name of Villas-Boas was raised in his post-match briefing, but his view on the current Chelsea came as he added: "We have to keep working. There are things we cannot change.

"We have to try to hide our weaknesses. It is important to try and hide the situations where you are not very good. It is difficult for us but look at the Premier League table and we are there."

One of the things Mourinho can change - and surely will - is the status of Mata. It is a matter of some conjecture to regular observers of Chelsea to see their best player marginalised as he has been so far.

If there is no thaw in the feelings between Villas-Boas and Mourinho then there is growing affection between Chelsea's manager and Mata. And no wonder after the manner in which he provided the momentum that transformed a limp performance for 45 minutes into something vaguely resembling the old power and menace of the earlier Mourinho era.

For all the tactical nuances discussed in relation to Mata, the art of good management is having your best and most significant players on the pitch. Mata remains at the heart of this category for Chelsea and Mourinho is surely wise enough to have acknowledged this.

There are other matters for Mourinho to solve, not least a place in his plans for £30m Willian - who was nowhere to be seen, not even alongside Mata on the bench.

It appears Mourinho remains to be convinced and there was no escaping the irony that it was Eriksen, who Spurs turned to after Willian was snatched away from them at the last moment by Chelsea, who ran the first-half show.

But there is plenty for Mourinho to work with and his words after the game suggested strongly that Mata will become increasingly important to the beauty of his project.

The transition period facing Villas-Boas is the result of the changing face of Spurs caused by the rebuilding programme undertaken following the £85m sale of Gareth Bale to Real Madrid.

And despite a second half in which the touches of Eriksen and the ingenuity of Andros Townsend were nullified by Chelsea's changes, Villas-Boas could feel satisfied with many things as he made a hasty dash from White Hart Lane to join the celebrations for former club Porto's 120th anniversary.

Mourinho touted Spurs as potential title contenders before the game. He may have overstated their case. He may even have been mischievously ratcheting up the pressure on his adversary Villas-Boas.

The reality is that Spurs have every right to consider themselves for the serious business of the top four but the scale of their summer reconstruction suggests the title will be beyond them.

Spurs have power in midfield in the shape of Moussa Dembele and Paulinho, with Sandro to add, but the talented Roberto Soldado was short of good supply, a fact recognised by Spurs fans as they gave him a sympathetic and rousing ovation when he was substituted for Jermain Defoe.

Bale's game-changing and match-winning interventions have gone and it was never going to be a swift process replacing them. This remains a work in progress for Villas-Boas.

Honours ended even between the former friends. They do not seem interested in repairing the bond that has been so publicly broken - but the season still holds plenty of promise of happiness and success as they go about the job of piecing together the squads they are reshaping.