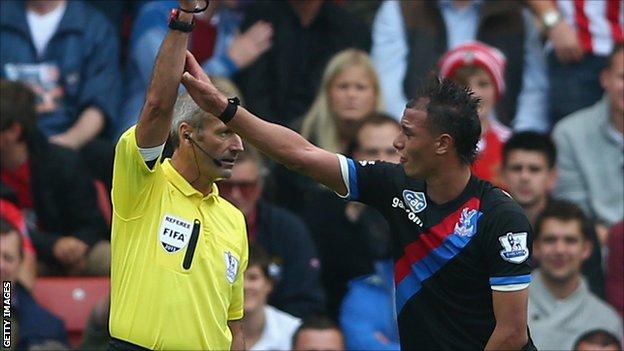 Crystal Palace manager Ian Holloway says he is "annoyed" by Marouane Chamakh's apparent dive after the striker was booked for simulation against Southampton.

Chamakh found himself one on one with Artur Boruc but, after taking the ball around the Saints keeper, went to ground rather than shoot.

"Chamakh looks like he's dived there to be honest, which I'm not too happy about," Holloway told BBC Sport.

"He went over far too easily."

Palace were beaten 2-0 by Southampton, but the score was level when Chamakh had a good chance to give Holloway's side the lead.

"I cannot understand why he didn't shoot or chip it," added Holloway. "Such is life. If he would have scored there everything would have been different.

"He thinks the keeper caught him. I'm not annoyed at him, it was a brilliant move and on another day he might have been given it. I'm not an advocate of what he did. I'm sure when he sees it back he would have thought he should have shot.

"We need to dig in and find ourselves. I won't keep them [Palace] up if we keep making mistakes. We need to be more clinical and stop making errors."

The defeat leaves newly-promoted Palace 19th in the Premier League with just one victory and five defeats from their opening six matches back in the top flight.

Southampton, meanwhile, moved up to fourth with their victory.