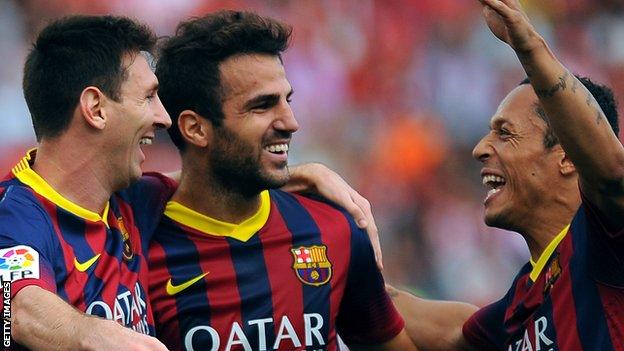 Lionel Messi was substituted with a thigh injury as Barcelona beat Almeria 2-0 for a club-record seventh straight La Liga win at the start of the season.

The Argentine, who scored his eighth league goal of the campaign when he netted the opener, will have tests on his injury ahead of Tuesday's Champions League trip to Celtic.

Almeria remain one of only two sides yet to win in the league this season.

Gerardo Martino, who was appointed Barca coach in the summer, beats a record set by five other managers - Pep Guardiola (2009-10) and Tito Vilanova (2012-13) were among the handful to have started a season with six straight wins.

Messi, 26, who appeared before a Spanish judge as part of a tax fraud investigation on Friday, gave Barcelona the lead on 21 minutes, curling a shot home from 20 yards, before asking to be replaced with a thigh problem eight minutes later.

Adriano made it 2-0 shortly before the hour mark, tapping Cesc Fabregas's low cross into the net from close range.

After the game, the Brazilian said of Messi's injury: "I hope it's nothing and he can be with us for the upcoming games because he's an important player. The team is completely different with him."