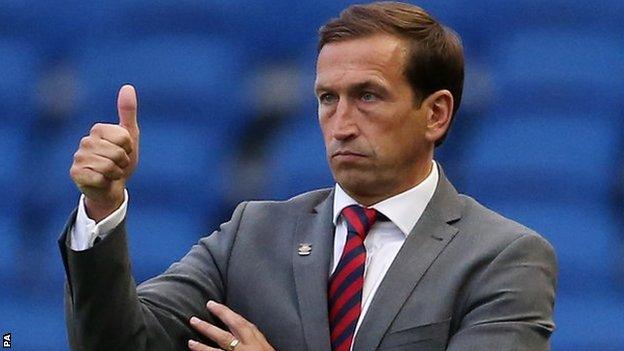 Justin Edinburgh has praised all those involved in Newport County since he two years ago.

Under the former Tottenham defender's guidance, the Exiles returned to the Football League for the first time in 25 years after winning last season's Conference Play-off final.

"We've come a long, long way. I think we've excelled as a club on and off the pitch," Edinburgh said.

"It's a lot of credit for everyone involved."

Despite being hampered by a lengthy injury list this season, Newport have not looked out of their depth in League Two and sit eighth in the division after Saturday's

Newport were relegated from the Football League in 1988 and went out of business the following year with debts of £330,000.

The club was reformed and began its slow rise back up the divisions after rejoining the English pyramid system in the Hellenic League.

The momentum has gathered pace in the past few seasons, helped by EuroMillions Lottery winner Les Scadding taking over as chairman four years ago, and culminating in their Wembley Play-off triumph over Welsh rivals Wrexham in last season's finale.

A move away from the council-owned Spytty Park to groundshare with the city's rugby teams at Rodney Parade last season has also proved a success, with home crowds averaging just under 4,000 this season.

"I take immense pride out of where the club has come from in my short space of time and I still feel there's more to come and we can progress," Edinburgh added.

"If the club isn't stable off the pitch then we're putting in jeopardy the future of the club and we won't do that.

"I've had that at a previous club [Rushden & Diamonds] where the club went out of business and it's not very nice.

"We are excelling on the pitch but certainly off the pitch we're doing everything that we can to make sure that we're being thoroughly professional and getting things right.

"So everyone is working together and it's very, very vital that off the field is as good as on it."

Newport are next in action with a trip to play Bury in the league on Saturday, 5 October.