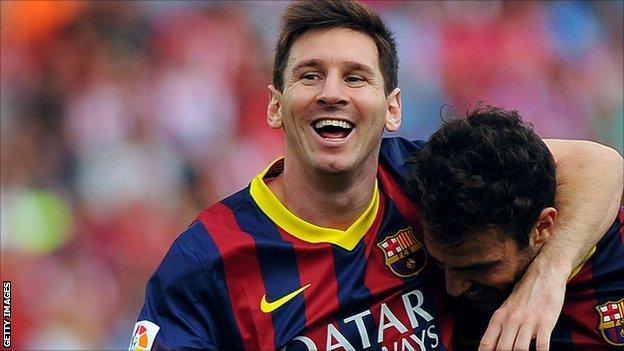 Barcelona forward Lionel Messi will be sidelined for up to three weeks after pulling a right thigh muscle in the 2-0 win over Almeria on Saturday.

The injury to the world player of the year will rule him out of Tuesday's Champions League trip to Celtic.

Messi, 26, scored as Barca recorded a club-record seventh straight La Liga win at the start of the season.

It is the Argentine's second injury of the season after he missed an earlier game after bruising his left thigh.

He also missed several games at the end of last season with a right hamstring pull.

In addition to the Celtic match, he will also miss two Spanish league games against Valladolid and Osasuna.

"Leo Messi has a small injury to the biceps femoris in his right leg," a Barcelona statement read.

"This was confirmed by medical tests undertaken by the player on Sunday morning at Medical Services Sport City.

"The Argentinian will be out for approximately two to three weeks, which will certainly force him to miss Barcelona's two games this week - on Tuesday against Celtic and next Saturday at the Camp Nou against Valladolid."

Barcelona are already set to be without a large chunk of their defence for the midweek trip to Scotland due to injury.

Javier Mascherano, who has been in good form this season, was ruled out in midweek with a hamstring problem and joins Jordi Alba, who is suffering the same injury, on the sidelines.