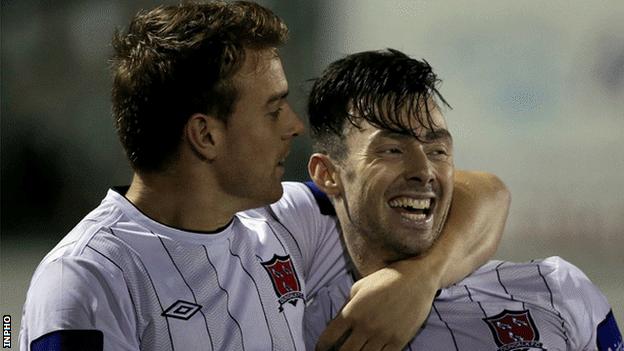 Towell scored two in three minutes midway through the first half and then added another on 66 minutes as Stephen Kenny's men won with ease.

Derry felt they were hard done by when they did not get an early penalty.

They claimed Michael Rafter was brought down by home keeper Peter Cherrie, but the Derry man was booked for diving.

If that sixth-minute decision had gone the other way, Cherrie would probably have been dismissed.

Dundalk's win lifts them up to second place in the table as champions Sligo Rovers could manage only a 0-0 draw against Cork City.

If Derry are to grab a place in the 2014/15 Europa League, they need to finish fourth and hope Dundalk or Sligo win the FAI Cup.

Dundalk made the breakthrough in the 25th minute when Kurtis Byrne chested down for former Hibs man Towell to shoot right-footed past Gerard Doherty.

The Derry keeper was picking the ball out of the net again just two minutes later as 22-year-old Towell fired in another fine finish from the edge of the penalty area.

Towell then started and finished the move which gave him his first ever hat-trick, running from deep to cap Dundalk's emphatic victory.