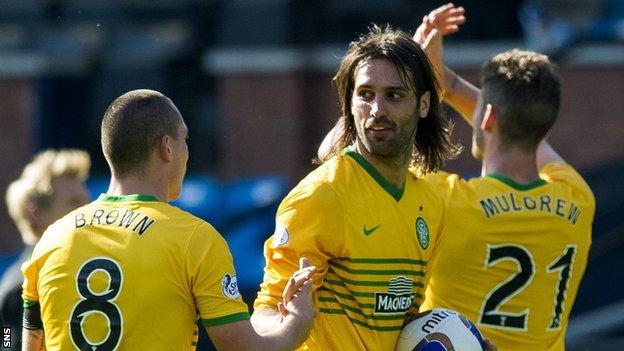 Georgios Samaras has urged Celtic to be even sharper in front of goal ahead of Barcelona's Champions League visit.

The Greek netted a hat-trick in Saturday's 5-2 win against Kilmarnock and manager Neil Lennon described the striker's performance as "world class".

"I don't think we will have so many chances against Barcelona so we need to be more clinical," said Samaras.

"If we have the chance, we need to put it in the back of the net if we want something good from the game."

The victory at Rugby Park followed a surprise Scottish League Cup defeat by Morton on Tuesday but Samaras insists Celtic's spirits were high even before their five-goal haul in East Ayrshire.

"Confidence is always high," he said.

"We always believe in ourselves and our team. We don't need to beat Kilmarnock 5-2 to go and be competitive against Barcelona.

"I feel good within myself. I don't need any confidence. I believe in myself every hour and every day.

"I know exactly what I can do for this team and to help my team-mates win games."

Celtic opened their Champions League Group H campaign with a 2-0 defeat by AC Milan and Samaras says his side will "go and enjoy" the visit of Barca, who lost 2-1 at Celtic Park in last season's tournament.

"We were a bit unlucky in that game against AC Milan, we didn't take our chances," added Samaras.

"We have to stay focused, try to minimise our mistakes and try to play to our strengths."