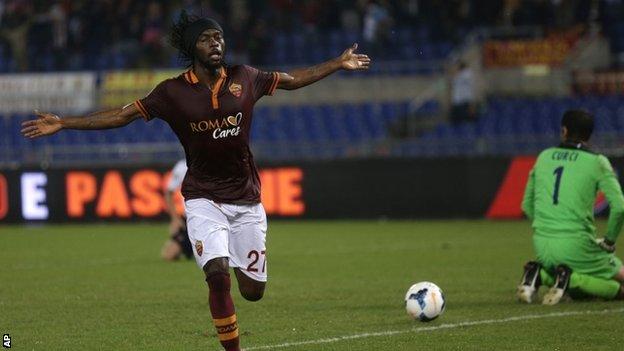 Roma went back to the top of the Serie A table as ex-Arsenal forward Gervinho scored twice in a 5-0 rout of Bologna.

Adem Ljajic also scored as Roma kept up the league's only perfect start.

The ex-Manchester United midfielder, 20, headed in from close range after Carlos Tevez had struck the crossbar, although the hosts were furious as they thought the Argentine was offside.

Torino have failed to win the last 15 derbies, a run stretching back to 1995.

Inter Milan, another of the four teams yet to lose in the league this season, drew 1-1 with Cagliari. Mauro Icardi gave Inter a 75th-minute lead, but Radja Nainggolan rescued a point eight minutes later.

German Denis scored twice against his former club as Atalanta beat Udinese 2-0, while Lazio threw away a two-goal lead to draw 2-2 at bottom side Sassuolo.

Catania beat Chievo 2-0 for their first win of the season and Verona saw off Livorno 2-1.

Unbeaten Napoli had gone top on Saturday with a brace from Goran Pandev.