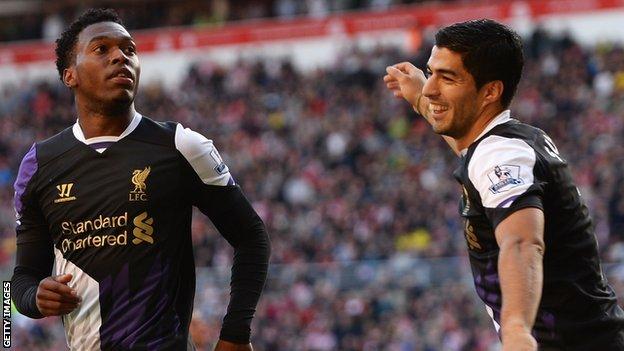 Liverpool's strike partnership of Luis Suarez and Daniel Sturridge is "up there with the best", according to manager Brendan Rodgers.

Sturridge scored and set up two goals for Suarez, who made his first league start after the end of a 10-game ban, in a 3-1 win at Sunderland on Sunday.

"I am not sure there are two better in the league," said Rodgers.

"Those two are right up there with the best in the country and you saw that against Sunderland."

The Liverpool boss said Manchester United's forward pairing of Robin van Persie and Wayne Rooney was 'outstanding' but praised the qualities of Suarez and Sturridge after they helped secure a victory which moved the Reds up to second in the league.

England striker Sturridge, 24, opened the scoring from a corner at the Stadium of Light before latching on to a raking Steven Gerrard pass and crossing for Uruguay international Suarez to double the advantage.

Sunderland pulled a goal back through Emanuele Giaccherini after half-time, but Sturridge again set up Suarez to secure the points.

"On the second goal, Steven Gerrard makes an absolutely breathtaking pass out of pressure and Daniel's touch, pace and power takes him in, and he has shown that quality just to roll the ball in for Luis to get his finish," added Rodgers.

"Those two will only get better. You can see their understanding. We have done a lot of work with them together in training and they looked very, very bright.

"They are two different types as well, which makes it hard for defenders because one has pace, power and two good feet, and the other is a wriggler and can shift his body very quickly and ends up in the box.

"The dynamics of them are very good."

Suarez made his comeback from his ban in Liverpool's League Cup defeat by Manchester United in midweek, but the game at Sunderland was his first Premier League outing since 21 April.

"He is not fazed by much. He has a remarkable mentality. His determination, the steel in his mindset, is phenomenal. He is just so focused," said Rodgers.

"Our supporters deserve to see someone of that quality, but his talent deserves to be out on the field rather than sitting in the stand, and that's something we are working very hard on in order to make sure that happens this season."

Liverpool are two points behind leaders Arsenal in the table and ahead of Tottenham on goal difference.

They the weekend before the 1-0 defeat at Old Trafford - and Rodgers was pleased to see a return to winning ways.

"I thought the work we put into it was exceptional," he said.