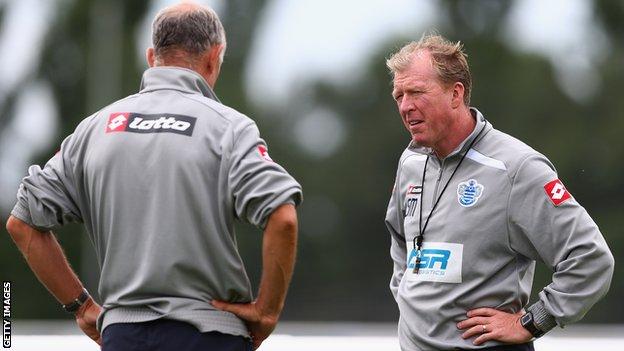 The 52-year-old has been working as first-team coach at QPR under Harry Redknapp since July.

McClaren will not take charge of Derby's game against Ipswich on Tuesday, with academy manager Darren Wassall stepping in as caretaker.

Clough, 47, was sacked after Saturday's loss to Nottingham Forest.

McClaren formerly played for Derby and then spent four years at the club as assistant manager under Jim Smith before moving to Manchester United in 1999 to become Sir Alex Ferguson's right-hand man.

His first management job came at Middlesbrough in 2001, and he led them to League Cup success in 2004 and the Uefa Cup final in May 2006 before succeeding Sven Goran Eriksson as England boss three months later.

However, McClaren was sacked in November 2007 after England failed to qualify for Euro 2008, but returned to club management in the Netherlands with FC Twente.

He won the Dutch title with Twente in 2009-10 before quitting to join German side Wolfsburg, but was sacked by them in February 2011 and his next job was back in England with Nottingham Forest.

However, he was only in charge at the City Ground for 112 days before resigning in October.

McClaren returned to FC Twente in January 2012, but left 13 months later and has not managed a club side since then.