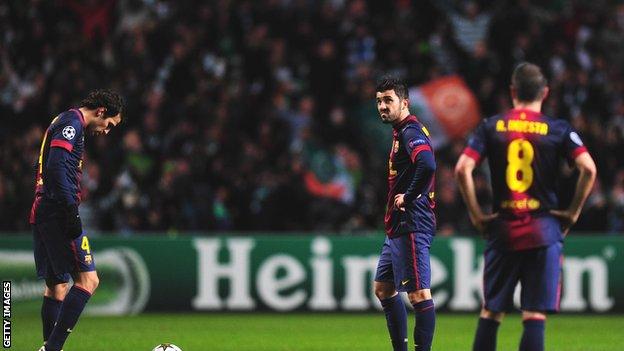 Barcelona insist revenge is not their motivation when they .

The Hoops caused one of the major European shocks last season when they beat the Catalans 2-1 in the group stages at Celtic Park.

"Revenge? No. We're going there to enjoy this game, this atmosphere. We'll see what happens," said sporting director Andoni Zubizarreta.

Celtic and Barca - past meetings

Celtic and Barcelona have played each other eight times, all in the past 10 years, with the Hoops winning two to Barca's four

Celtic have only failed to score in one of those matches, a 1-0 away reverse in the 2008 Champions League quarter-finals

"It's always a pleasure to play at Celtic Park," he said.

"We're expecting a great atmosphere against an opponent who made things very difficult for us last year.

"They are very strong on their ground and they look to play with a lot of pressure."

Barca, who have won their first seven league games of the season, are without Messi after the 26-year-old Argentina forward injured his right thigh muscle in the 2-0 win over Almeria on Saturday, ruling him out for two to three weeks.

"We must do without the best player in the world, but we have a squad with extraordinary players.

"The players who are here are very good and we have to play with what we have."

Barcelona beat Ajax 4-0 in their Champions League opener, with Messi scoring a hat-trick, while Celtic lost 2-0 to AC Milan.