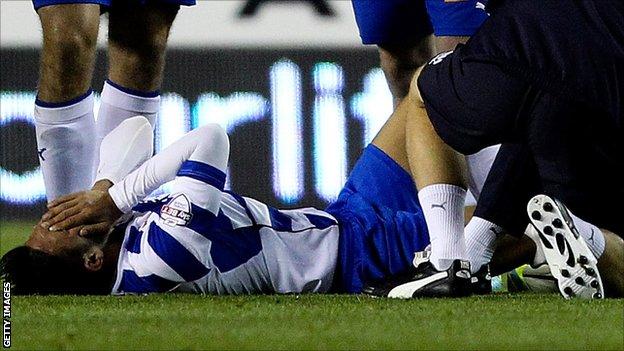 Reading manager Nigel Adkins says he is "gutted" at the news midfielder Jem Karacan will be out for six months with a knee injury.

Karacan, 24, suffered the injury against Leeds earlier in September.

"We're gutted we've lost Jem because I thought he was going to become a stand-out player," Adkins told BBC Berkshire.

On Saturday Karacan tweeted he would need knee surgery, adding: "Going to be out for at least six months, long road to recovery begins after op Wednesday."

The lads are desperate to be involved, there is a feel good factor at the club and everyone want to be a part of it

Adkins added: "We'll look after him and I think the club have acted really quickly in bringing Chris Baird in, so that is a positive."

Karacan is one of a number of players Reading have out injured but the club hope to welcome back Jobi McAnuff and Nick Blackman for the midweek trip to Barnsley.

And Adkins says they have a squad good enough to cope with the mini-crisis.

"The Championship is a demanding league and you need competition places," he said. "The lads are desperate to be involved, there is a feel-good factor at the club and everyone want to be a part of it.

"We've got two tough games up and we are going to need a strong squad.

"Jobi trained for the first time on Friday, then on the pitch after the game on Saturday so we're delighted with that and all being well he comes into contention for the next two games."

"Hal [Robson Kanu] got a bit of cramp late on against Birmingham, Garath [McLeary] has a nasty gash on his ankle so he had to come off as well.

"Nick Blackman had a swollen knee in the week, I'd like to think he will be somewhere near [being available] come Tuesday."

However, Adkins less hopeful on Royston Drenthe and Danny Williams making the trip to Barnsley.

"Royston and Danny have foot injuries, I'm not sure about them [for Tuesday]. I've got to make sure with tough games that everyone is as fit as possible. "