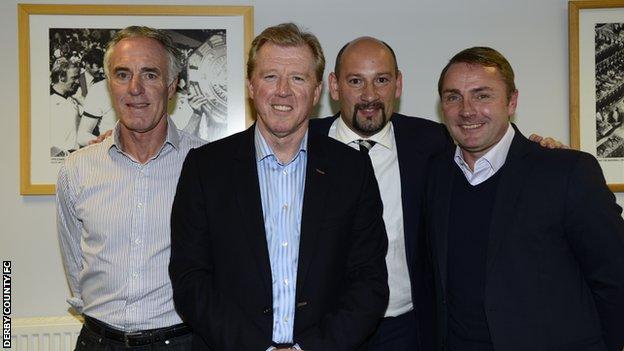 He replaces Nigel Clough, who was sacked as manager following Saturday's loss to Nottingham Forest.

The 52-year-old's last managerial job in England was at East Midlands rivals Forest, and he joins the Rams after working as first-team coach at QPR.

The midfielder made 25 appearances and was part of the Rams side that won promotion back to the old First Division in 1987 before leaving the Baseball Ground in 1988.

In 1995 he returned to Derby as Jim Smith's assistant manager after a spell as Oxford United youth team coach.

He helped guide the club to the Premier League in 1995-96 before joining Manchester United as Sir Alex Ferguson's right hand man in 1999.

McClaren, however, will not oversee with academy manager Darren Wassall in temporary charge of the team.

Simpson, who played for Derby between 1992-97, has been appointed first-team coach while Steele, who worked alongside McClaren at Derby when he was assistant manager to Jim Smith, also returns to Pride Park.

"Steve is a highly qualified coach with all the skill-sets required to be a success here at Pride Park," Derby chief executive Sam Rush said in a club statement.

"It is also important that Steve, Paul and Eric know what it means to play for Derby County and they have been at the club during the good times."

Rush also revealed that there will be a major overhaul of club's football department, and that McClaren will work alongside a yet-to-be-named technical director.

"We will now be making structural changes to our football operations," Rush told BBC Radio Derby.

"For me it is extremely important to have someone focused on the coaching.

"But modern football has a huge amount of complexity attached to it, and so we will be looking, alongside the managerial appointment, to have a technical sporting director appointment - someone who will take responsibility for all areas of football operations.

"It will take us longer to make that appointment."

It will be McClaren's third spell with the East Midlands club that he first served as a player in the 1980s, then as assistant manager to Smith.

He helped the Rams reach the Premier League during his four-year spell as number two before moving to a similar role alongside Sir Alex Ferguson at Manchester United in 1999.

The former Hull, Bristol City and Oxford United midfielder's first management role came at Middlesbrough in 2001, and he led them to League Cup success in 2004 and to the Uefa Cup final in 2006.

He succeeded Sven-Goran Eriksson as England boss three months later, but was sacked in November 2007 as the Three Lions failed to qualify for the 2008 European Championships.

McClaren made an impressive return to club management in the Netherlands, leading FC Twente to their first Dutch title in 2009-10.

However, he quit in 2010 to join German side Wolfsburg, only to be sacked after 24 games in charge.

The Yorkshireman then made his English football comeback as Nottingham Forest boss in 2011 - a post he held for only 112 days before resigning.

McClaren took the helm at Twente for a second time in January 2012, and stayed with the club for 13 months.

He has most recently been part of Harry Redknapp's coaching team at QPR and had been linked with the managerial vacancy at Sunderland following Paolo Di Canio's exit prior to Derby confirming their interest in him.