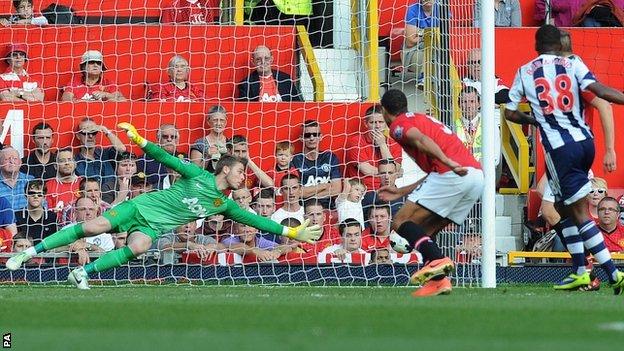 The 2-1 victory was Albion's first there since Robson was part of Ron Atkinson's West Brom team that triumphed 5-3 in December 1978.

"Rather than be critical of Man United, you have to say how very good the Albion were," Robson told BBC Sport.

Happy away days in Manchester

"Not many teams come and attack at Old Trafford like they did."

West Brom's win ended a run that had seen them lose 13 of their previous 15 trips to Old Trafford.

And Robson was impressed with the speed with which Albion, orchestrated by deadline-day signing Stephane Sessegnon, attacked, creating far more than the two chances taken by Morgan Amalfitano and Saido Berahino.

"They played very well," added former England captain Robson. "They attacked with a lot of pace and looked good on the ball.

"They scored two really good goals and could have had more. You have to applaud them for that.

"It's taken them a bit of time to get going this season, but they had a very good transfer window.

"Steve Clarke's made a couple of good signings there, he's got them playing very good football and, if they finish anywhere in the top 10 again, then he'll have done another good job."

Robson's performance in Atkinson's Albion team of the late 1970s and early 1980s ultimately brought him a British record transfer fee £1.5 million move to Old Trafford in October 1981, when he followed his old West Brom boss to United.

After returning to Albion as manager in November 2004, for a near two-year spell in charge, which included a battling away point against United to help his Baggies side beat the drop back in 2005, Robson is back working at Old Trafford as a club ambassador.

Having witnessed Saturday's performance first-hand, he admits that the current team's pace and passing is worthy of comparison with Atkinson's class of 1978 - the one difference being that this weekend's result was a lot more of a shock than it was 35 years ago for a then title-chasing Baggies team.

"When we won there in 1978, before the game, given that we had players of the calibre of Laurie Cunningham, Cyrille Regis and Tony Brown, you'd have considered that an even contest," added Robson.

"Whereas you only had to look at the bookies' pre-match odds to judge how big a surprise Saturday's result was."

In the end, long runs in the FA Cup and Uefa Cup added up to a punishing programme of 59 matches during the 1978-79 season for Atkinson's Albion side, who slid away over the closing weeks to finish third behind champions Liverpool and runners-up Nottingham Forest.

"We'd been up there in the top two almost all season and it was only tiredness and the size of our squad that cost us," Robson recalled.

"We had a lot of extra games in the cups. I only missed one game that season and John Wile played in them all."