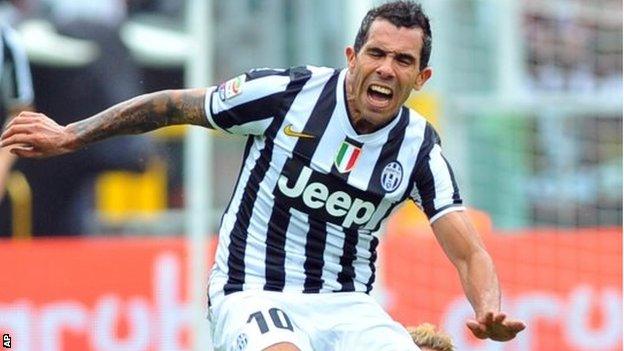 Juventus striker Carlos Tevez is a doubt for Wednesday's Champions League game with Galatasaray after suffering an ankle injury in Sunday's derby win over Torino.

Tevez was injured in a tackle from behind by striker Ciro Immobile, which Juve coach Antonio Conte said merited more than a yellow card.

The 29-year-old ex-Manchester City forward stayed on and

But he could now miss the Gala tie.

A statement on Juventus's website read: "During the first half of the Serie A encounter with Torino, Carlos Tevez sustained a lacerated and contused wound on his right ankle.

"The striker's condition will continue to be assessed over the coming hours, but he remains a serious doubt for Wednesday night's Champions League game against Galatasaray."

Tevez has scored three goals in seven games for Juve since his £12m summer switch from Manchester City.

Wednesday's opponents after they opened talks with Tevez's former boss at Manchester City.