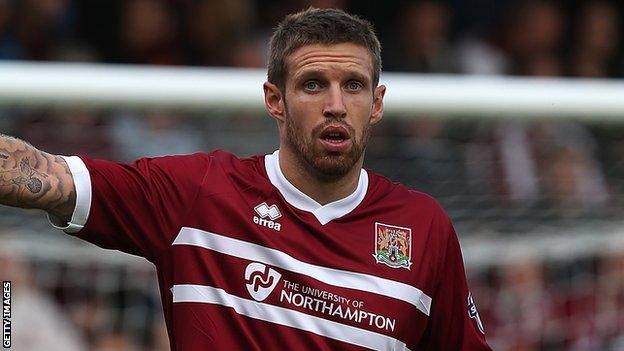 Northampton Town's Paul Reid is hoping his arrival at Sixfields will coincide with an upturn in their results.

The 31-year-old began his second spell with the Cobblers by helping them to their first clean sheet of the season.

He told BBC Radio Northampton: "I wouldn't have joined here if I didn't think we could pull away.

"Whatever has gone on before, I'm not affected by that. I'm coming in with a fresh attitude and hopefully that can rub off on other people."

Reid has agreed a contract to the end of January, nine years after leaving the club to join Barnsley.

Despite Saturday's goalless draw with Morecambe, Northampton still lie next to bottom in League Two, having taken only five points from nine matches.

Manager Aidy Boothroyd has bolstered their defence in recent weeks by signing Mathias Doumbe and Reid.

"There's quite a lot of experience in there," said Reid.

"There's plenty of voices and enough games under our belt. But you want that first clean sheet as a defender. I always look for that. It's nice to help out and get that monkey off your back.

"I know Aidy and [assistant manager] Andy King from Colchester. We got on really well and Aidy is fair with you if you give him everything you've got - I like to think I do that."