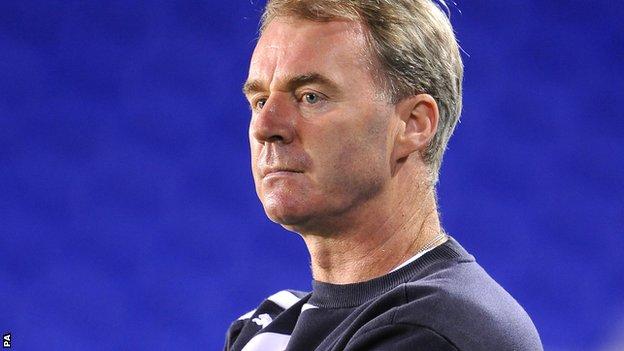 Plymouth Argyle boss John Sheridan admits his side are under pressure after their 0-0 home draw with bottom-of-the-table Accrington Stanley.

Sheridan's side have not scored since Reuben Reid's goal in the 1-0 win over Bristol Rovers on 7 September, and currently lie 15th in League Two.

"There's a lot of pressure on us. We're not scoring goals and we're not winning games," he told BBC Radio Devon.

"People are getting very agitated - it wasn't good enough again."

Is it time for change? That's something I've got to look at now

Argyle have scored six goals in League Two this season, with the stalemate against Accrington coming in the wake of a 3-0 defeat by Wycombe and a 1-0 loss to Scunthorpe.

The Pilgrims' next fixture is a local derby against Exeter City, who are currently in sixth place after a strong start to the season.

"People are getting a bit ratty - including myself," added Sheridan.

"We're all agitated because we should have won the game. You can't fault their effort, but it's not just about effort - it's know-how and awareness; our pass appreciation wasn't good enough.

"The game was there to be won and it should have been over at half-time. We didn't take our and chances and made life difficult for ourselves."

Sheridan insisted he still had faith in his players, but admitted it may be time to look at changes to his side.

"I'm picking the same players. I believe in the players to score goals but we're not doing it," he said.

"Is it time for change? That's something I've got to look at now.

We're not winning games or scoring goals so it might be time for a big change and give people a chance to show me what they can do because there's probably one or two thinking 'when am I going to get a game?'"