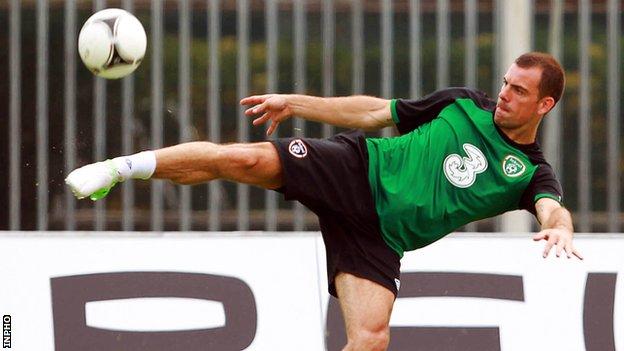 Darron Gibson, Andy Reid and Anthony Stokes have been recalled to the the Republic of Ireland squad in the wake of Giovanni Trapattoni's departure.

The three men, along with Wolves striker Kevin Doyle, have all been included in interim manager Noel King's squad for World Cup qualifiers against Germany and Kazakhstan.

Defenders Richard Dunne and John O'Shea, who are suspended for the game in Cologne on 11 October, will return to the squad for the clash with the Kazakhs in Dublin four days later.

Gibson's exile has been self-imposed after Trapattoni left him on the bench for the entire Euro 2012 finals.

Reid has not figured since an incident at the team hotel in 2008 and Stokes has also been left out in recent seasons despite impressing with Celtic.

Everton midfielder Gibson revealed earlier this month that he would make himself available for selection once again following the 74-year-old Italian's exit.

Hull City midfielder Robbie Brady will miss the qualifiers because of a hernia problem while Stoke City striker Jon Walters is a doubt with a groin injury.

Brady will have surgery on the injury during the international window and will be sidelined for up to 10 days.

While King's temporary appointment has seen Reid, Gibson, Stokes and Doyle return to the fold, there are no places for regulars Darren O'Dea, David Meyler, Simon Cox or Conor Sammon.

Ireland currently sit in fourth place in Group C with a purely mathematical chance of making it to Brazil next summer after costly defeats by Sweden and Austria in September.

That proved fatal for Trapattoni, who guided the Republic to within a controversial play-off defeat by France of the 2010 World Cup finals and then took them to Euro 2012.