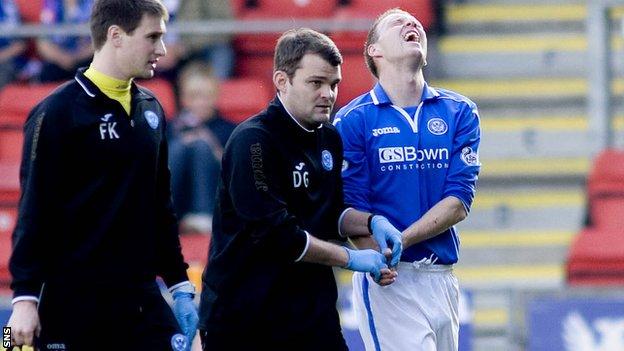 St Johnstone defender Steven Anderson has been ruled out of action for up to eight weeks after undergoing surgery on a dislocated thumb.

Anderson suffered the injury when he stumbled in the build-up to Partick Thistle's goal during in the Scottish Premiership.

said: "It's a blow for Steven and for us.

"We'll get specialist help to see what can be done to get him back a bit quicker than the current estimates."

Those suggest that the centre-half will be out for six to eight weeks, but Wright hopes that Anderson will live up to his "reputation as a quick healer".

"It might leave us a bit short on numbers at the back, but certainly not in terms of quality as I have Gary Miller and Dave Mackay who can both move into that role," said the manager.

A St Johnstone statement explained: "Attempts to re-set the thumb on the pitch, in the treatment room and in Perth Royal Infirmary all proved unsuccessful and it took a lengthy operation under general anaesthetic in Dundee on Saturday evening to reset it and repair tissue and bone damage around the thumb."