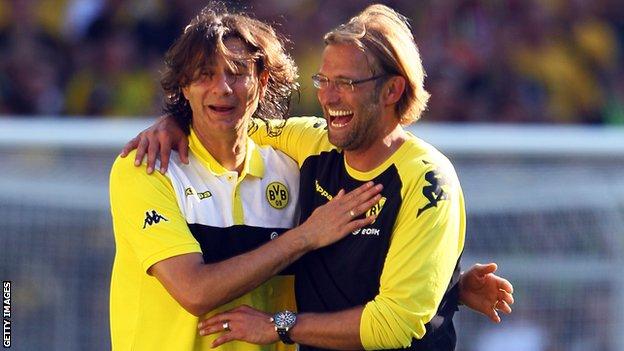 Borussia Dortmund will cope with the touchline suspension of coach Jurgen Klopp against Marseille on Tuesday, according to midfielder Nuri Sahin.

Assistant Zeljko Buvac will be on the sidelines instead, a man Klopp has been quoted as saying he has a telepathic relationship with.

Klopp was for berating the fourth official.

"Zeljko Buvac is basically Klopp's twin, and he'll be on the bench," Sahin told the Bundesliga website.

Buvac played alongside Klopp in 1992 for Mainz and was his assistant at Mainz, following him to Dortmund in 2008.

Former Liverpool loanee Sahin added: "Both of them see football in exactly the same way.

"The coach will prepare us in exactly the same way on the training field, and usually during a game you're so focused that you've hardly got any time to go to the sidelines and find the coach. We know he won't be there and are prepared for that."