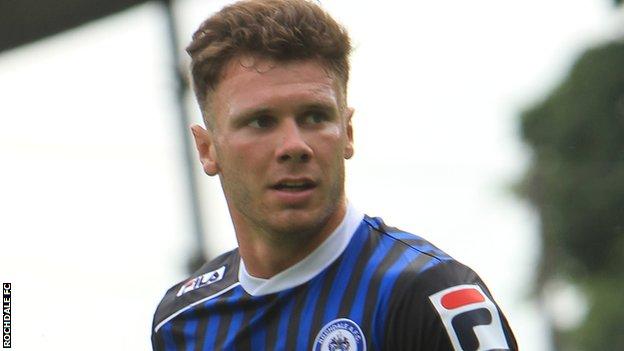 The 21-year-old returned to Dale this summer, after starting his career at Spotland, and has scored five goals.

Asked what level Hogan could play at, Hill said: "Premier League - all day every day. He's got the lot.

"I think he's been excellent. He scores goals, he's got pace to burn, he can be creative and he's difficult for older, experienced players."

I wouldn't want to see him go to the Championship or the Premier League and not play, as that's not development

Dale have had a number of forwards that have gone on to play at a higher level, including Rickie Lambert, Adam Le Fondre and Grant Holt.

After coming through the youth system at Spotland, Hogan was allowed to leave in 2011 and had spells at FC Halifax, Stocksbridge, Ashton United and Hyde as he rebuilt his career.

His goal in the 3-2 win against Wycombe was his fifth of the season, making him joint top scorer so far in League Two.

"I wouldn't want to see him go to the Championship or the Premier League and not play, as that's not development," Hill told BBC Radio Manchester.

"There's too many players housed in Premier League clubs who are not even playing on a matchday, so his development is best in League Two at this moment in time."