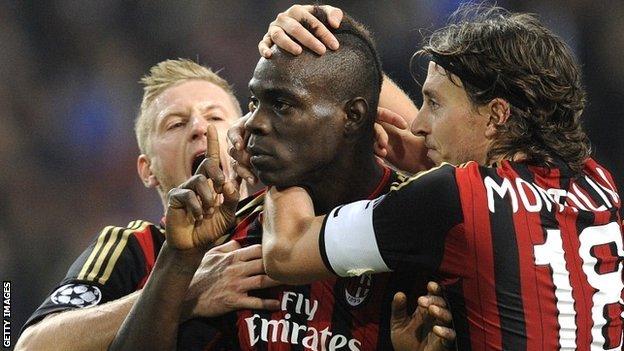 Former Manchester City striker Mario Balotelli converted an injury-time penalty to rescue a 1-1 draw for AC Milan at Ajax in the Champions League.

Milan had looked set for defeat when Stefano Denswil headed in unchallenged in the last minute of normal time.

But Balotelli slotted home after Mike van der Hoorn was controversially ruled to have pulled him down in the box.

Mario Balotelli had scored all 21 of his previous penalties before seeing his spot-kick saved in Milan's 2-1 defeat by Napoli on Sunday 22 September. A red card in that match brought a ban - and the game against Ajax was his first appearance since.

Milan's draw means they lie second in Group H, two points behind ahead of back-to-back European games against the Catalans.

Chelsea, the other Premier League team in action on Tuesday evening, recovered from a home defeat to Basel in the group opener with

Basel's home match against Schalke was temporarily halted in the first half when environmental protestors abseiled from the roof of St Jakob Park.

The visitors took all three points with 20-year-old Germany international Julian Draxler's superb half-volley from the edge of the area proving decisive.

The Spaniards have won all seven of their league games this season, including but fell behind to Jackson Martinez's header before Diego Godin and Turan struck to turn the tie around.

In Group G's other game, Austria Vienna and Zenit St Petersburg played out a drab goalless draw, which will suit neither side after defeats in their opening games.