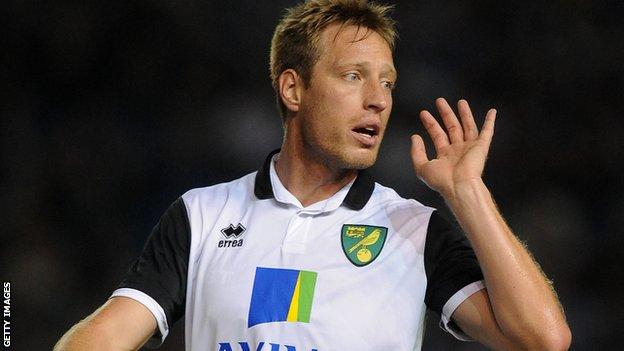 Leeds United manager Brian McDermott has confirmed he is interested in bringing Argentine striker Luciano Becchio back to Elland Road.

I made an enquiry regarding Becchio and he wasn't available. Will it change? Things do."

Leeds sold Becchio, 29, to Norwich last January, with Steve Morison moving in the other direction.

United have since loaned Morison back to his former club Millwall.

McDermott told BBC Radio Leeds: "I made an enquiry to [Norwich manager] Chris Hughton regarding Becchio and he wasn't available. Will it change? Things do."

Becchio scored 86 goals in 221 appearances for Leeds after arriving from Spanish third tier club Merida in 2008.

However, he has made only nine appearances for the Canaries, seven as a substitute, since being signed for an undisclosed fee, believed to be about £2m, and has yet to score.

With Leeds having slipped to 15th in the Championship after three consecutive defeats, McDermott has widened his search to improve his attacking options.

"I made an enquiry for a couple of young players at Arsenal as well - Gnabry, who scored their first goal on Saturday, was one of them. I wouldn't think they will let him out now," he said.

"It's a tricky situation because Premier League clubs can't just go out and loan anyone, they want better players too if they are strengthening, so they don't want to be left short in their own squads."