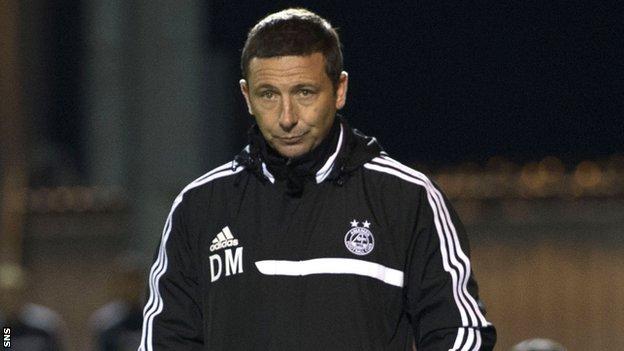 Derek McInnes said his Aberdeen players failed to reproduce their recent form in the draw against St Mirren.

A late strike from Peter Pawlett secured a point for the Dons, but McInnes was frustrated at a sluggish display.

"I think it was a game we came here to win," said McInnes. "But I don't think we showed enough of ourselves to get all three points."

"We took a point, but we came here to get all three."

I don't think we were quite at ourselves in that first-half period, but I expect us individually to show a bit more than we did

Steven Thompson opened the scoring for the Buddies in the 54th minute with a close-range strike, but Pawlett rifled home an 84th-minute equaliser to see the Dons stretch their unbeaten run to six games.

McInnes praised Danny Lennon's side, but felt his Dons side failed to reproduce the form showed against Falkirk, Inverness and Partick Thistle, which saw the Pittodrie club notch up nine goals without reply.

"When we got the equaliser, it looked like the ascendency was with us," said McInnes. "Ultimately, we ran out of time to get the next goal.

"I'm disappointed because we're better than we showed tonight.

"Credit to St Mirren for a battling performance, but I don't think we were quite at ourselves in that first-half period, but I expect us individually to show a bit more than we did.

"The players deserve credit, because even though we weren't at our best by any stretch, we always looked threatening and we got our just rewards with the equaliser.

"You set up to win every game, you're not going to win every one, but there's an approach to try to win them.

"I think regardless of the opposition, you've got to make sure you're good enough on your own merits to get all three points, and tonight, certainly in the first half and in bits and pieces of the second, we weren't."