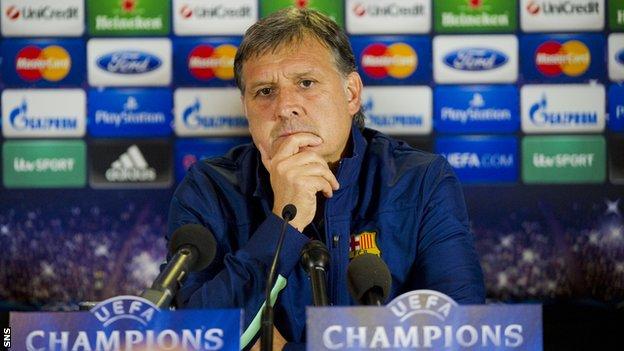 Barcelona coach Tata Martino admits his side could struggle to cope with Celtic's aerial threat when the sides meet at Celtic Park on Tuesday.

"Of course we will attack again, but we don't have to leave room for set pieces and for them to take advantage of those situations," he said.

"We know that we should be wary of set pieces and counter attacks."

Celtic will, of course, hope that Charlie Mulgrew's deliveries from dead balls can once again lead to goals for the Scottish champions.

His corner was headed home by Victor Wanyama in the thrilling 2-1 victory for Celtic last November.

And it was Mulgrew's free-kick that was flicked on by Georgios Samaras off Javier Mascherano to give Celtic a goal in the 2-1 defeat away from home the month before.

Meanwhile, both Martino and Cesc Fabregas accept that the absence of Lionel Messi through injury would be keenly felt, given his status as the world's best player.

"It is a test because we always want him in our team," said former Arsenal midfielder Fabregas.

"Obviously Lionel is the best player in the world. You obviously will miss a player of his talent and dedication.

"He can win a game at any moment so we are sad for that but you cannot feel sorry for yourselves because you are missing a great player.

"Without Messi we will have to take more responsibility.

"I think we all have to step up and make sure that we don't feel his absence, and we can play great football without him.

"When he is not there we have to adapt the situation and players like Neymar, myself if I play, Alexis Sanchez, Cristian Tello, Pedro Rodriguez; we have to step up and do the job that a striker is made for, which is scoring goals and giving assists."

Like Fabregas, the Barca coach Martino insists Messi's absence would not be used as an excuse if they have a bad night at Celtic Park.

Fabregas also praised Neil Lennon's work as the Celtic coach, likening him to the Atletico Madrid manager Diego Simeone for the energy and passion he transmits to his team.

He added: "We'll have to match their commitment and fight and then be better with the ball if we're to win."