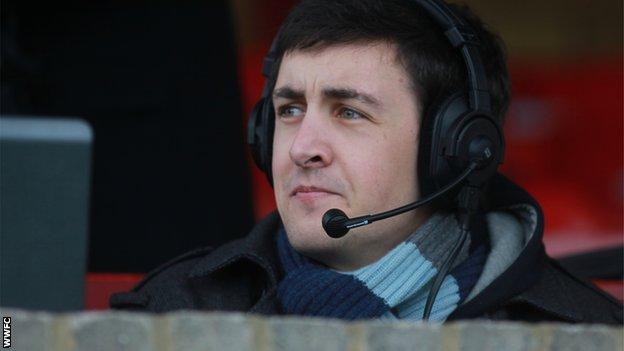 Wycombe Wanderers have appointed 26-year-old fan Matt Cecil to their board of directors.

Cecil is a former employee of the club in the marketing and media department.

He is joined by David Cook, a board member for the Wycombe Wanderers Trust, the owners of the Chairboys.

"It's a really proud day for me. My friends are asking if I'm going to be a boardroom type now but I'm not going to do anything different," Cecil told BBC Three Counties Radio.

"I still want to go to away games, sit with the fans and be in the bar beforehand. Things like boardroom lunches and car parking spaces can maybe wait until I'm retired.

"What the board is looking for is a group of people with varied skills. So everybody on the board will be contributing something different.

"I think they wanted somebody who understood new media and marketing initiatives and that's my background really."

The League Two side were acquired by the supporters' group in June 2012 after a period of financial uncertainty.

Cecil is five years younger than Mansfield's chief executive Carolyn Still, who was appointed when she was 29.

Chester City were briefly owned by a then 24-year-old Stephen Vaughan Jr four years ago, before their eventual demise, while rugby side Gloucester have Ryan Walkinshaw, 25, as chairman.

Cook has served on the Wycombe Wanderers Trust board for nearly three years and is involved in arranging the club's 125th anniversary exhibition at Wycombe Museum.