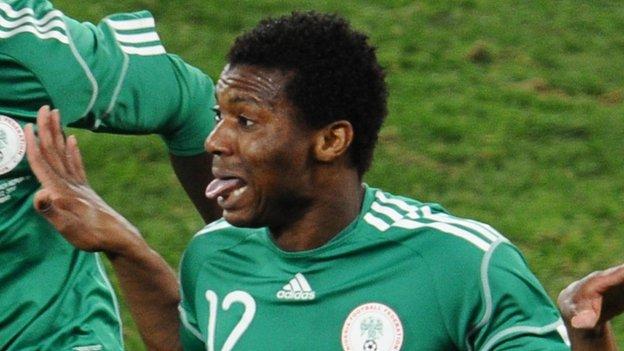 Qatari club El Jaish have announced the signing of Nigeria forward Kalu Uche from Kasimpasa on a two-year deal.

The 30-year-old becomes the club's fourth signing of the season.

"I have been in Europe for 12 years now and this was a great chance for me to play in another continent with such a big club," Uche told BBC Sport.

"I am delighted to have joined El Jaish because I am still hungry for success and hopeful I can make a big contribution to the club."

The Super Eagle landed in Doha on Monday and put pen to paper after completing a successful medical.

He scored 19 goals for Kasimpasa to end a single season in Turkey as the second top scorer in the Super Lig.

A widely reported wage dispute led to an unceremonious exit, but Uche said he can only take positives from a successful campaign in Turkey.

"I had a fantastic one season in Istanbul and Turkey. The fans and team-mates were extremely nice to me and my family," he said.

"I can only wish the team all the best this season and for the future."

Uche, who has played in Spain, Poland, France, Switzerland and Turkey, said he is happy with his latest move.

"Everyday is a new beginning and what you've done elsewhere is in the past," he added.

"I'm happy that we could sort everything out before the end of the Qatar transfer window [at midnight local time on 30 September]."

Uche and El Jaish refused to disclose financial details, but Turkish media say Kasimpasa will get between US$4m and $4.8m.

The Super Eagles forward scored two goals for Nigeria at the 2010 World Cup in South Africa, against Greece and South Korea.

He has been absent from the Nigerian squad since he scored alongside his younger brother Ikechukwu in the country's 2-0 friendly win against Zambia in November 2011.