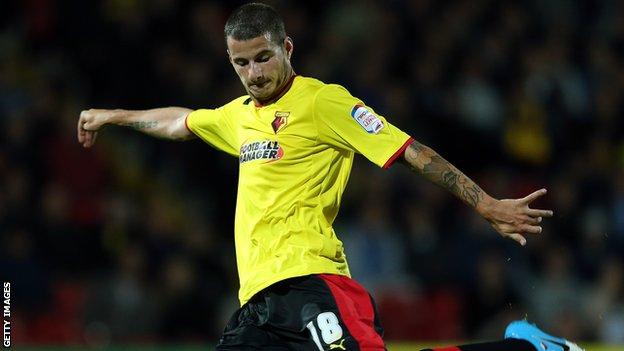 Watford came back from behind to record a fourth win in five games and end Huddersfield's unbeaten home record.

Danny Ward headed Huddersfield into the lead early in the first half but Watford equalised seconds later as Fernando Forestieri curled home.

Daniel Pudil put Watford ahead before the break, poking home from close range.

Hornets have a sting

Watford are the most free-scoring side in the Championship with 22 goals, shared between 10 different scorers.

James Vaughan headed wide in the second half, but Huddersfield could not find an equaliser.

The win moved Watford up to fourth in the Championship, while a first defeat in six games leaves Huddersfield 12th.

An entertaining encounter saw both sides have chances throughout, with Huddersfield the first to threaten as midfielder Oliver Norwood fired over.

Ward had been restored to the starting line-up by Huddersfield manager Mark Robins, and he repaid his manager with a goal in the 17th minute.

Adam Hammill picked out the winger with an intelligent cross and Ward glanced a header into the back of the net.

The celebrations from the home fans lasted for less than a minute, though, as Watford drew level when a fine, flowing move ended with Forestieri curling a delightful shot beyond home keeper Alex Smithies.

Vaughan headed wide as Huddersfield set about trying to regain the lead, while Smithies did well to deny Sean Murray after good work by Forestieri and Troy Deeney had opened up the Huddersfield defence.

But Smithies should have done better when Watford took the lead three minutes before the break. Forestieri struck a free-kick that Smithies parried and Pudil reacted quickly to lift the ball over the Huddersfield keeper.

Josh McEachran shot wide midway through the second half but Watford had to hang on in the closing stages as Huddersfield pressed forward.

Ward dragged a free-kick wide, while Watford keeper Manuel Almunia denied Vaughan a goalscoring chance as the visitors held on.

Huddersfield boss Mark Robins: "For the first 20 minutes we showed how good we are but after that Watford came at us.

"We gifted the two goals and were on the back foot after that. For their first goal they broke really quickly and the finish from Forestieri was Premier League quality.

"We have to believe in ourselves, keep the ball better and be patient. We have lost our unbeaten home record to a good side."

Watford manager Gianfranco Zola on Forestieri: "No one has ever doubted his qualities but he has to use them in the right way.

"He has all the tricks and the pace but he is still young. He is improving and has huge potential.

"It was a good performance but we had so many chances in the second half we should have killed the game.

"Forestieri was the best player on the pitch. He was quite a handful, holding up the ball and creating space. It's just a pity we didn't score a third goal."