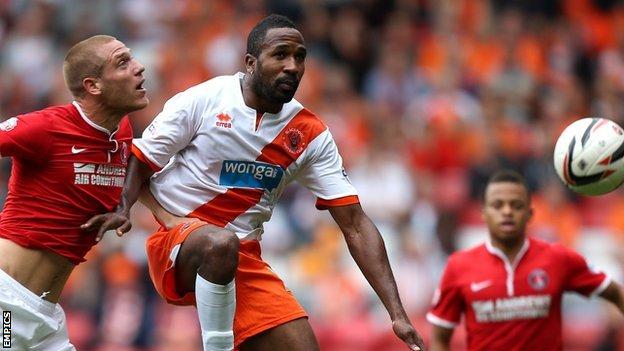 An uninspiring affair at The Valley ended with a point apiece for Charlton and Blackpool.

Dale Stephens had an early sight of goal for the home side but curled a free-kick just over the bar.

A 25-yard Jordan Cousins strike for Charlton was also tipped around the post by Blackpool keeper Matt Gilks.

Tom Ince almost won the game for the visitors late on but angled a shot wide, leaving Blackpool with a fourth successive Championship draw.

Charlton managed to keep their first clean sheet of the season but have not won a game in their last six Championship outings and are just above the bottom three.

Blackpool, who lie fifth in the table, may have marginally had the better of the game but there was little to choose between the two sides.

Stephen Dobbie and Ince were the most likely candidates to score for the visitors but both failed to convert their strikes at goal.

Dan Gosling, signed on loan from Newcastle, came on for Blackpool and he fired a long-range effort wide before Ince failed to take his late chance.

"It's our first clean sheet of the season and our first at home since November. I have been willing us to get one and it has been individual mistakes that have really cost us.

"In respect of this game, another positive is that it's another point for us, especially with the players we have available.

"We are missing a number of key players but the boys who are out there are willing themselves and pushing themselves to try to get us wins and points."

"A goal could have changed the game - it was what it needed.

"We just needed that bit of quality in the final third and that's what the game was lacking.

"From set plays we were trying to get it in the box but we couldn't find our strikers and it just ended up as two teams cancelling each other out.

"We had chances - we had the one with Thomas at the end which fell to him on his right peg - but there was a lot of huff and puff in the final third but not a lot of quality."