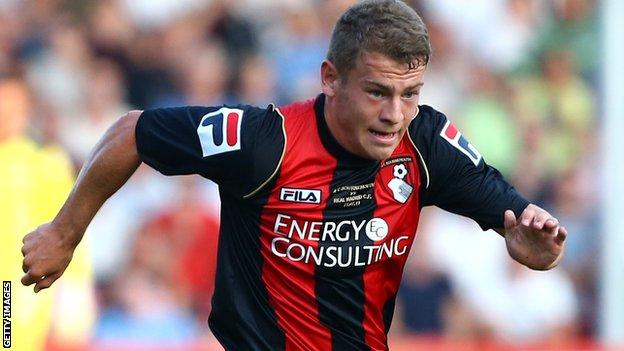 Martyn Waghorn put Millwall ahead with a low shot and set up Liam Trotter to make it 2-0 after only 10 minutes.

The Cherries hit back as Ryan Fraser curled in before the break, Steve Cook headed in Ian Harte's corner and Harry Arter put them ahead from distance.

Millwall's Alan Dunne saw red and Lewis Grabban scored from the spot, before substitute Brett Pitman hit a late fifth from another penalty.

This was the clubs' first league meeting in six seasons but they last met in the first round of the League Cup in August 2009, when Millwall were 4-0 home winners

It looked set to be a miserable debut for Bournemouth keeper Stephen Henderson, on loan from West Ham, who found himself picking the ball out of the net twice early on, while his Hammers connections earned him plenty of barracking from Millwall's boisterous fans.

But the game turned out to be an unhappy return for his opposite number David Forde, who had a loan spell at Bournemouth in 2008.

With Trotter linking play well between midfield and attack, the Lions looked the more likely team to score early, and Henderson was beaten for the first time when Waghorn drilled in left-footed from an acute angle following a harmless-looking free kick.

The visitors soon bagged a second as Waghorn slipped a perfect ball through a flat-footed Cherries defence for Trotter, who drew Henderson out of goal before carefully lobbing the ball over him and into the net.

But the hosts grew in confidence as the first half went on, as South Africa striker Tokelo Rantie fired wide before Grabban created the opening for Fraser, who had switched wings with Marc Pugh and came off the left flank to beat Forde from the edge of the box.

Jack Collison nearly levelled in first-half stoppage time as his left-foot drive was tipped over by Forde, and Eddie Howe's side began the second half in top gear as centre-back Cook rose highest at the far post to equalise with a powerful header from Harte's corner.

Suddenly, Millwall were struggling to cope with a succession of Bournemouth attacks as Harte rattled the crossbar with a trademark 25-yard free-kick, before Rantie fed Arter, who marked his return from injury as a fierce left-foot drive put the Cherries ahead.

Millwall responded with a double substitution, introducing Nicky Bailey and Steve Morison, but the switch barely had time to take effect before Dunne, who had been booked in the first half, handled in the area to earn himself a second yellow card - his second red of the season - and Bournemouth a penalty.

Ex-Lions forward Grabban sent Forde the wrong way, and there was no route back for Millwall, as Bournemouth used their man advantage to control possession and see out the game without alarm.

They even earned a second penalty in stoppage time when Fraser accelerated into the box and was fouled by Paul Connolly, leaving substitute Pitman the chance to power in the seventh goal of an enthralling match.

"We showed great character to comeback from being two goals down. I was disappointed with the Millwall goals because they were both avoidable.

"But that is the way we play and you have to allow for mistakes because we like to get forward and attack when we can.

"It was a very open game, but our fans stuck with us and responded in the right manner and in the end we were easy winners."

"There were some poor decisions from the referee, including the red card to Dunne. How was that a deliberate hand ball?

"It's one thing to give a penalty for that incident but another thing to send him off and it was very harsh as he had no way of winning the ball.

"The goal just before half time gave Bournemouth some confidence and momentum. We were hindered by the refereeing decisions but we did not help ourselves."