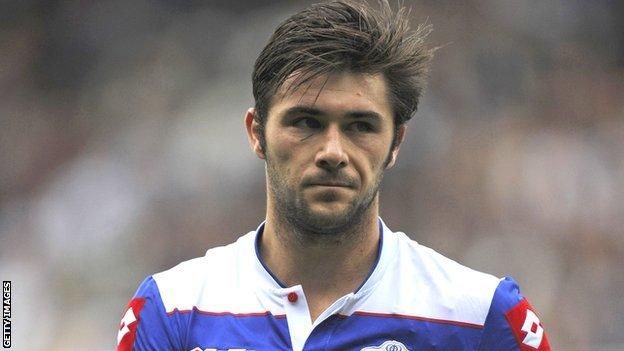 Austin's low shot put the hosts ahead after good work by Junior Hoilett.

And Austin made it 2-0 late on when he scored from the penalty spot after he was tripped by Martin Cranie.

The visitors defended resolutely but rarely threatened and a dominant QPR were able to set a new club record of eight successive league clean sheets.

Rangers, who have moved three points clear of third-placed Leicester City following their defeat at Doncaster, had numerous chances to go ahead before the break.

Richard Dunne saw an early header from Tom Carroll's corner cleared off the line by David Perkins and away goalkeeper Jack Butland made a fine double save to keep out Austin's strike and the follow-up attempt by Alejandro Faurlin.

Barnsley, who have now lost all six of their away league games, briefly threatened when Tom Kennedy's mis-hit cross was tipped over by Rob Green and also when they thought they should have had a penalty for a handball by Niko Kranjcar.

The hosts' domination continued after the break and only a fine goalline clearance by Paddy McCourt kept out a Krancjar shot.

QPR have set a new club record of eight successive clean sheets in the league.

They also remain the only club in the Championship who have yet to lose a league game.

Substitute Hoilett tricked his way to the left byeline and his pull-back was knocked in by the summer signing from Burnley from close range.

And the in-form Austin then doubled his tally for the afternoon from the spot, his fifth goal in as many games.

"In the end it was comfortable, but you're always anxious I suppose until you get the breakthrough.

"I just felt we needed to increase the tempo of the game in the second half. We'd had a couple of really good chances and their keeper made great saves.

"The longer it goes on the more you can get frustrated, so I think the introduction of Junior Hoilett helped us. We needed to get the ball out wide more and he helped us with that.

"And it was nice to see Charlie score again, but the crowd also appreciate what he does for the team."

"It was probably 20 or 30 seconds of us not doing what we wanted to do which cost us.

"You can't give Charlie Austin two inches. We said before the game that we'd have to mark him because he's a unique goalscorer at this level. Then Martin Cranie doesn't have to tackle him there.

"We defended well as a team and limited them to two chances in the first half. We kept them at bay and kept their fans low, but that first goal really gave them energy and verve.

"There were a few tired performances in the last 20 minutes. We just ran out of legs.

"We've got to balance and shape this squad and find out who we're going forward with. It's two weeks to assess things."