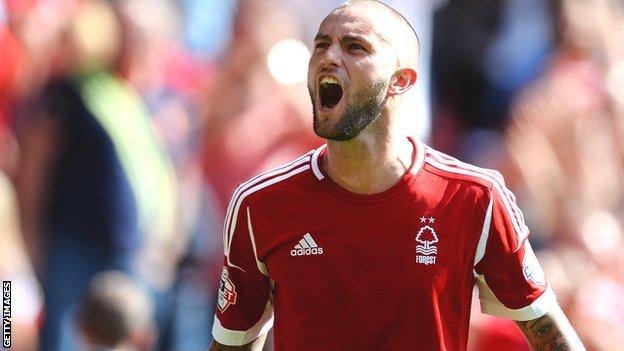 But Lansbury headed the visitors level from Radoslaw Majewski's cross within a minute of the restart and Darius Henderson's sweet low shot made it 2-1.

Lansbury added a third from the penalty spot and the Reds held on despite having Nathaniel Chalobah sent off.

The on-loan Chelsea midfielder was dismissed for picking up two yellow cards.

Nottingham Forest are unbeaten in six Championship games, having won three and drawn three since losing to Wigan on 31 August.

However, Forest defended stubbornly with 10 men for the remaining 23 minutes and seven minutes of injury-time to go back up to fourth in the Championship, one point behind third-place Leicester.

Brighton had started strongly and Kazenga LuaLua twice went went close to putting the hosts ahead while Ashley Barnes forced a fine save from goalkeeper Karl Darlow.

At the other end Brighton keeper Tomasz Kuszczak made good saves from Henderson and Majewski.

But Brighton deservedly went ahead after a deep cross by Stephen Ward was mis-hit into Crofts' path by Ashley Barnes.

The hosts failed to build on that lead though, and Forest were good value for their victory after the interval.

Lansbury grabbed his first goal with a superb header from eight yards.

Darlow prevented Brighton from regaining the lead only three minutes later when he pushed a Barnes shot onto the post.

And two goals in the space of two minutes as good as won the game for the visitors.

Henderson put his side ahead with a left-foot shot into the bottom corner on after Matthew Upson could only half clear a Danny Collins cross.

Lansbury's second was blasted home from the spot following a foul by Gordon Greer on Simon Cox.

And Chalobah's sending off, which came about for a second yellow card when he shoved LuaLua, could not inspire a late Brighton rally.

Brighton head coach Oscar Garcia: "Sometimes this kind of thing happens. It's a game that everybody wants to win and we tried to play against them face to face.

"I'm proud of how we are playing. It's significant that the ground is full and I'm proud of the fans and the way they supported the team all the time despite the bad result.

"I'm also proud to be the coach of Brighton. The fans support the players and the team. They know we play attractive football but the black point is we don't score."

Nottingham Forest boss Billy Davies on Henri Lansbury: "He is a great character, you can see the spirit he plays with. He has a great work ethic and fully deserved his two goals.

"This team never say die, never, and it was a great three points. It wasn't one of our most emphatic wins but away from home we've done very well.

"The Brighton keeper made three or four great saves in the first half and we were disappointed to go in one nil down.

"At the interval I felt confident we would get the three points and we did so by showing tremendous resilience and wonderful character."