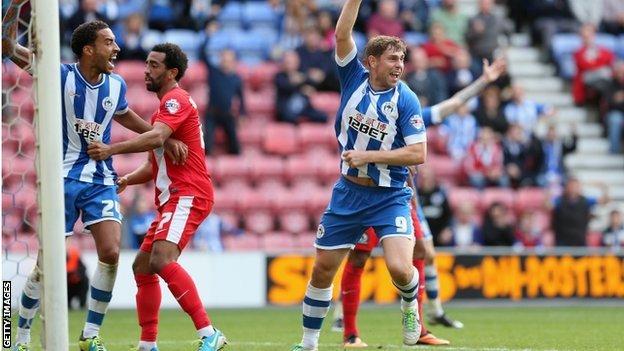 Tommy Spurr put Rovers in front after a Scott Carson error before Hanley was sent off for elbowing Nick Powell.

The Scotland defender's indiscipline changed the momentum of the game and Grant Holt came off the bench to force Spurr into an own goal, before Boyce glanced home to snatch the victory.

The win moves Wigan 12th in the table.

Boyce's header from a Ben Watson free-kick ultimately proved decisive, but Hanley's dismissal played a key role in Blackburn, who are ninth, failing to close out a winning position for the first time this season.

Gary Bowyer's side were seeking a third Championship win in succession for the first time since 2001 and, with Wigan appearing jaded from their Europa League defeat of NK Maribor, set about ending the Latics' unbeaten home record.

A big week for Wigan

Wigan manager Owen Coyle claimed Carson could return to the England squad after his performance against the Slovenian side, but the goalkeeper was at fault for Rovers' eighth-minute opener.

Carson spilt a long free-kick from Tom Cairney, allowing Spurr to drive home via a deflection.

James McArthur fired wide in response for Wigan, before they were given the impetus by Hanley's departure.

After playing a pass, he put an arm into the face of Manchester United loanee Powell, prompting an instant red card from referee Stuart Attwell.

Jordi Gomez and Powell both tested Jake Kean in the Rovers goal as Wigan took charge, before Coyle introduced Holt and Boyce off the bench.

It took just 12 minutes for former Norwich striker Holt to make his presence felt after a seven-game lay-off, his header following a Gomez corner finding the net thanks to Spurr's crucial last touch.

As the home side piled on the pressure, James McClean and Powell went close before Boyce headed home off the post to secure the 600th win in Wigan's history.

"You saw it last night in the rugby league, that comeback was amazing, and again today the lads showed a lot of good attributes there that really pleased me," said Coyle.

"We've shown that on the football side this year, the amount of points we've retrieved from losing positions...it tells you everything about the character and the spirit you've got at your club.

"People will always talk when they're winning games about how good the spirit is, that comes hand in hand, but the testimony to any team spirit and camaraderie is when your team is up against it."

"I didn't know what he (Grant Hanley) got sent off for and as he came off I asked him what he did. I have to be honest I didn't understand him with the answer he gave me so I need to go and see it.

"It changed the course of the game because up until then we were very comfortable. We were pleased with how we were playing and we're disappointed to be leaving here without taking something from the game.

"Once the referee makes the decision there's an hour to play and our lads were magnificent."