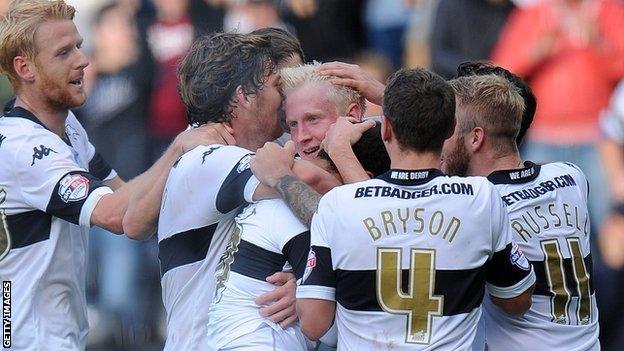 McClaren was named Rams boss last week and, although he inspired a superb comeback against Ipswich in midweek, this was his first game in charge.

And although Jason Pearce's header made it 2-1, Will Hughes sealed a deserved victory with a classy late shot.

A decade of Leeds pain

Leeds were in the Premier League when they last took three points at Pride Park, courtesy of a 1-0 victory in April 2002, when Lee Bowyer scored the winner

Former England manager McClaren chose to watch from the stand as the Rams continued where they left off on Tuesday, when they came from 4-1 down to draw 4-4, with a sparkling attacking display that secured a first home league win of the season.

The hosts, who move up to 10th in the Championship, almost went ahead inside four minutes when Hughes lobbed just over the bar following a scuffed clearance from goalkeeper Paddy Kenny.

Leeds should have gone ahead soon after, but Rodolph Austin blazed a shot over from eight yards, and they were made to pay as the Rams scored twice in three minutes.

Craig Bryson and Martin combined well for the latter to drive home the opening goal from 10 yards - and it was quickly 2-0 courtesy of a flowing team move.

Derby broke up a Leeds attack and the excellent Hughes played in Martin, whose backheel set up Russell to net with a low shot across Kenny.

The visitors were back in the game in the 45th minute when home goalkeeper Lee Grant failed to get to a cross and the ball dropped for Pearce to head into the unguarded net.

The home side's superiority remained after the interval as Leeds, who are 13th in the table, struggled to cope with Derby's attacking quality.

But they had to wait until 12 minutes from time to wrap up the victory when Bryson found Hughes and the teenager glided past a challenge before guiding a shot into the top corner from 15 yards.

"For the character they have shown from Tuesday half-time onwards, the players deserve tremendous praise and credit.

"We do our work and prepare the team as best we can but the players have to perform and take responsibility and they did that in the second half on Tuesday and today.

"Staying upstairs gives me a better perspective on the game and I think that's important early when it's a new team. I'm trying to get a picture of this instead of seeing legs and bodies on the touchline and shouting when they can't hear me, or ignore me!

"I think it helps me make better decisions for the team. I think it was important to keep out the way and let the players do their job which is what they did.

"In the two games we have seen all our frailties and all our strengths, and there's a lot of work to do."

"You are disappointed when you lose the first goal, which we have done too many times this season.

"We need to get a mentality away from home where we are very difficult to play against and we weren't today.

"We played a lot of football today in the middle of the pitch but you are judged on what you do in both boxes and we weren't good enough there.

"We need a winning mentality. When I was at Reading two years ago when we hardly had any points on the board after 10 games and we just clicked into place and we worked on that."