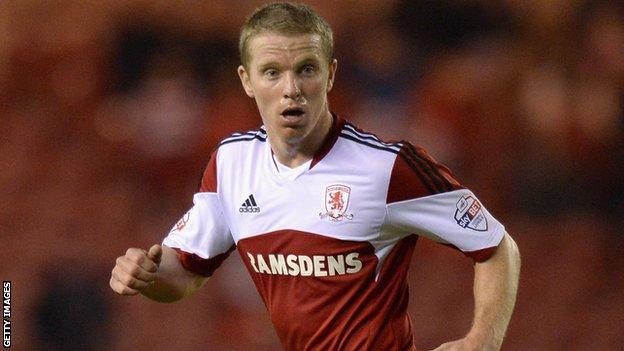 Middlesbrough came from behind to beat Yeovil and secure their first victory of the season at the Riverside.

Liam Davis raced clear to give the visitors an early lead, but Grant Leadbitter equalised before having a penalty saved, though Albert Adomah stabbed home the rebound.

Jacob Butterfield then netted a low shot from 25 yards out and Kei Kamara's header put the result beyond doubt.

Victory moves Tony Mowbray's men up to 15th in the Championship table.

It also eases the pressure on the former Boro defender after a difficult start to the season; their only previous league victory coming at Charlton in August.

The afternoon got off to a bad start for the hosts when Davis capitalised on skipper Rhys Williams's mistake to shoot between the legs of Jason Steele.

Leadbitter settled any nerves just four minutes later with a half-volley which bounced through a crowd of players and into the net.

Kamara hit the woodwork twice as Boro began to dominate - and their reward came when George Friend was brought down in the area by Joel Grant.

Yeovil goalkeeper Wayne Hennessey pushed Leadbitter's effort on to the post, but Adomah followed up for his second goal of the season.

Butterfield extended the lead after playing a neat one-two with Leadbitter, before Kamara sealed victory.

Yeovil striker Kieffer Moore had a great chance to pull one back late on but somehow hooked the ball clear from two yards out when it seemed easier to score.

"We gifted them an early goal but the reaction to that was very positive.

"We got the equaliser very quickly, we went ahead, we hit the bar, we hit the post, and we got ahead and stayed composed. It was a good display.

"So is it a relief? I don't think so. We have been playing well in recent weeks and we knew it would come.

"But yes, it is important to turn those good performances into wins. Six draws from 11 games is too many and all of those felt like defeats to us because we probably warranted more than a single point in all of those."