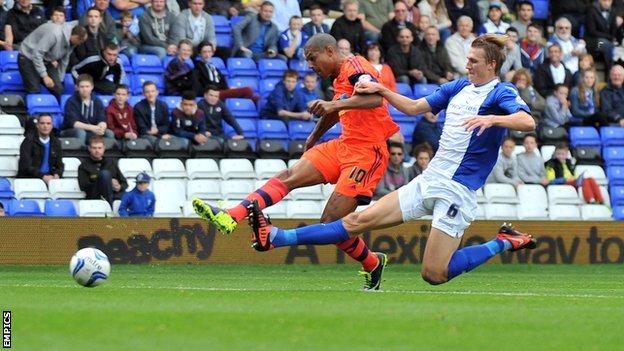 Bolton hung on to secure their first Championship win of the season with victory over Birmingham at St Andrew's.

Jermaine Beckford capitalised on a blunder from defender Dan Burn to slot home and give the visitors the lead.

Beckford then headed against the crossbar, before Neil Danns nodded home after Blues keeper Darren Randolph failed to deal with a cross.

Nikola Zigic looped in a header for Birmingham before Bolton survived a late penalty appeal to claim victory.

Midfielder Liam Feeney appeared to block Callum Reilly's shot with his arms in the area but referee David Coote did not point to the spot.

Bolton's victory meant they avoided matching their start to the 1902-03 season, when they failed to win any of their first 11 league games

The win will help ease the pressure on Bolton manager Dougie Freedman after his side's poor start to the season.

Birmingham did not help their cause with some crucial mistakes. The first came when centre-back Burn misjudged a clearance, allowing striker Beckford to race through and net his first goal of the season.

The hosts had scored 11 goals in their past three home games, but they struggled for a breakthrough against a stubborn Bolton side.

The closest they came to an equaliser in a scrappy first half was a 25-yard curler from Reilly which keeper Adam Bogdan palmed around the post.

Bolton should have made Blues pay for some sloppy play but a six-yard Beckford header from Feeney's cross came back off the crossbar.

However, when Randolph failed to clear another cross, Danns headed in from close range to double their advantage.

Zigic's goal - his first of the season, following a Chris Burke free-kick - and the late penalty appeal made sure Bolton had to endure a nervous finale, but they held on to move within two points of their opponents.

"It's not a relief because I strongly believe that if you work hard and you study the game, you get your rewards and that's what we've certainly done here.

"I've tried to stay calm. I've had good support from the chairman in a difficult moment, but we've certainly not been far away having registered five draws.

"You have to go through some bad moments to get your reward and that's what we've done."

"They're just individual errors from two lads who have been brilliant for us all season.

"They're human beings, we all make mistakes. Unfortunately for the two lads, their errors have cost us goals.

"There's no finger-pointing at them. Our general first-half performance, in terms of not being the driving force we have been in our previous three home games, was the catalyst for the result."