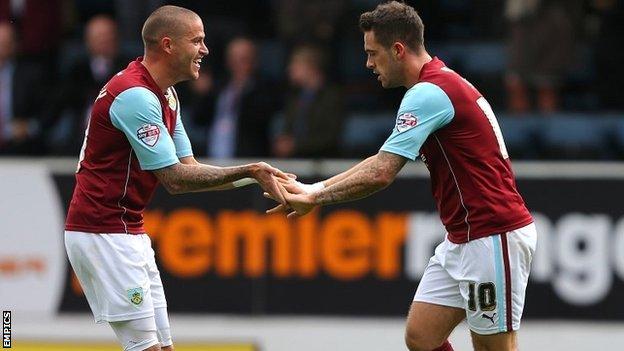 Strikers Danny Ings and Sam Vokes fired Burnley to victory over Reading to keep them top of the Championship.

Ings took advantage of a defensive error to strike in the first half, before Vokes slid in from a narrow angle with 10 minutes remaining.

Jason Shackell's own goal with eight minutes left set up a tense finish but Reading could not force an equaliser.

Victory was the Clarets' fifth in a row in the league and made this their best start to a season since 1961.

They finished runners-up in the top flight that season - and will be heading back there if they can sustain this form.

Defeat ended a six-game unbeaten run for the Royals as they slipped to seventh in the table.

After a cagey opening 20 minutes, Ings celebrated his midweek call-up to the England Under-21 squad by slotting home his seventh league goal of the season from just six yards after Kieran Trippier's seemingly innocuous ball was misjudged by two Reading defenders.

Vokes almost added a second two minutes later when David Jones's 25-yard drive was spilled by Alex McCarthy, only for the Royals goalkeeper to recover in the nick of time.

At the other end, Pavel Pogrebnyak forced Burnley keeper Tom Heaton to tip over a 30th-minute header.

But it was the hosts who continued to press, with Ings almost doubling his tally on the stroke of half-time when his shot drifted wide of the upright.

And Vokes doubled the hosts' lead after 80 minutes with his fifth goal in four Championship games.

Reading replied almost immediately when Pogrebnyak's header across goal bounced off Shackell's knee into his own net but the hosts held on.

Burnley boss Sean Dyche: "I thought we were absolutely excellent. We created many chances and we looked solid and their keeper had to be on form.

"We are still a work in progress but we went into the game with a good focus and we produced a really good performance. We showed we can compete against everyone and we are in a magnificent position to do that in every game we play.

"This was up there with our best performances of the season and we are on a roll, but it doesn't guarantee you anything."

Reading manager Nigel Adkins: "We have to give credit to Burnley because they sit top of the league and they were very good again in this one.

"We would like to think we can avoid the types of goals they scored, but we made three substitutions after an hour and changed our shape totally in an effort to control the game better.

"It was only 1-0 at the time and we endeavoured to get something from it, but Burnley worked very, very hard and I thought their front two were exceptional throughout."