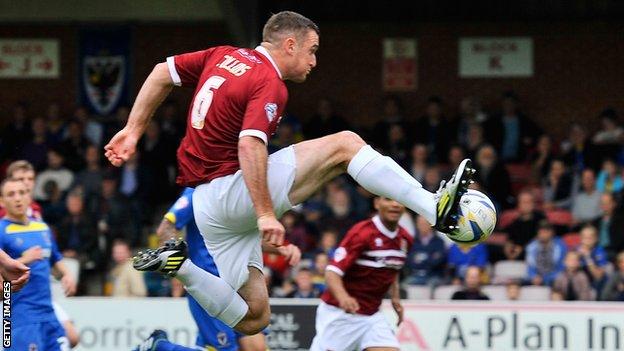 Northampton earned their first win in nine games as they beat AFC Wimbledon.

Centre-back Lee Collins opened the scoring when he poked in from Darren Carter's lofted free-kick.

The visitors doubled their lead as debutant Stuart Dallas calmly slotted past Ross Worner inside the near post.

Wimbledon's best chances fell to Michael Smith, who saw his curled effort blocked, and Harry Pell who was denied an injury-time goal through a diving save by keeper Matt Duke.

"I'm frustrated and disappointed by the players, I challenged them before the game and said it was one I expected them to win.

"I challenged them prior to the game, and said it's a game we should win and it would tell us a bit about what we have to do and what aspirations we should have this season.

"We knew what they would do and my staff and I prepped them on everything and I can't defend my players. It was unacceptable."

"We set up not to be beaten today but we knew we had enough players in the team to come here and get something.

"There's nothing in the league, we know that we've had a bad start but the last two games I've been really pleased with. We stuck at it and were really solid.

"My own disappointment is we could have had scored more goals for the opportunities we had, we could have made it more comprehensive."