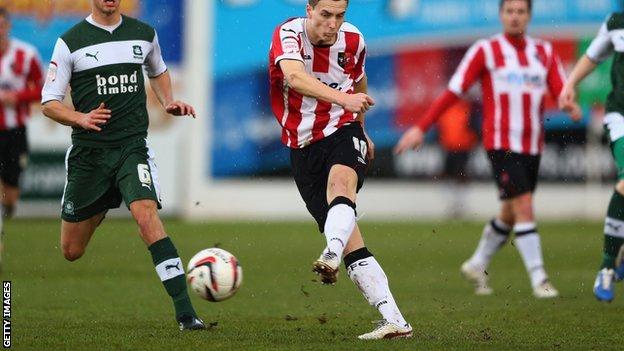 Late goals from Alan Gow and Scot Bennett secured a deserved three points for Exeter City in a hard-fought Devon derby against Plymouth.

Exeter had the best of the first half and had a penalty appeal rejected when Hamza Bencherif appeared to handle.

Luke Young's superb free-kick looked to have secured a draw but Gow capitalised on poor defending to curl home and Bennett slotted from close range.

Young's goal for the visitors was Argyle's first in nearly six hours of football this season.

"I'm very proud of the players and very pleased with the win - it was a really good game.

"For the second week running, we could have had a penalty but didn't and you have to believe that over the course of the season you'll get them.

"As for the free-kick (for Plymouth's goal), I'm not going to complain. I can see why he gave it and it was a brilliant free-kick.

"It would have been very easy to try to hold on but we made an offensive change and gave us a chance to get back in the game."

"The result is very hard to take, I thought we played well and we were well in the game throughout.

"We looked very confident and were passing it well and were causing them problems - then we shot ourselves in the foot and for the last five or 10 minutes we were all over the place.

"It wasn't a 3-1 game. For 80 minutes we put on a good performance but at the end of the day we've lost again - sometimes I'd rather come and play poorly and get something from the game."